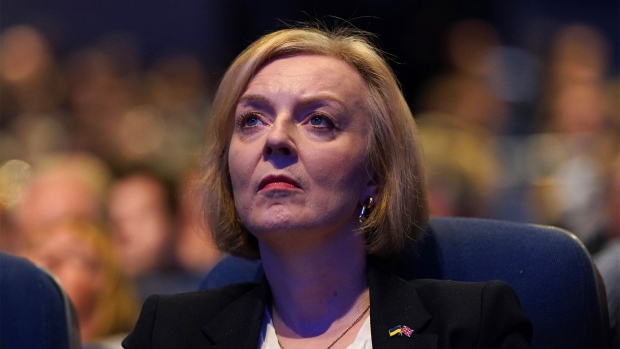 (Bloomberg) -- Liz Truss will try to get her beleaguered UK premiership back on track on Wednesday, after a bruising few days that exposed deep divisions in her ruling Conservative Party and left even members of her top team in open disagreement about what to do next.

Truss is struggling to keep control less than a month into her tenure, already forced into a humiliating U-turn over her plan to cut income tax for Britain’s highest earners, which spooked financial markets and hammered support for the Tories in opinion polls. Yet on Tuesday, tensions were still simmering and two members of her Cabinet expressed disappointment that she had backed down.

“Whenever there is change, there is disruption,” Truss will tell the gathering in Birmingham, according to her office. “Not everyone will be in favor. But everyone will benefit from the result -- a growing economy and a better future. That is what we have a clear plan to deliver.”

That “clear plan” already appears in doubt. Truss has built her political brand around clarity, decisiveness and a commitment to transforming the UK economy with a massive dose of deregulation and tax cuts. Allies say she has a sense of purpose that was lacking in government under her predecessor, Boris Johnson.

But having such a symbolic part of her plan fall at the first hurdle, the clarity has already blurred. MPs are no longer certain she has the mettle to defend what she stands for, and the prospect of more U-turns-- which cost Johnson so much momentum -- has re-emerged.

As another major fight looms over whether to raise welfare payments in line with inflation -- Truss has refused to commit to it -- her critics have become emboldened to rebel and made it harder for her to get things done.

One senior MP at the conference privately likened her government to a truck trapped sideways in a tunnel with no room to maneuver.

“Liz Truss was seen as strong and decisive and willing to make unpopular decisions, and voters do respect that kind of thing,” said Chris Curtis, head of political polling at Opinium. “Her mission, from a political strategy point of view, was probably a good plan -- trying to create economic growth before the next election and try and take credit for it. But increasingly, that strategy clearly isn’t working as political realities have got in the way.”

At her first session of Prime Minister’s Questions in Parliament last month, Truss impressed Tory MPs by giving straight answers -- almost unheard of with Johnson. A mini-Budget subsequently unveiled by her chancellor Kwasi Kwarteng left the country in no doubt of her tax-cutting, free-market, small-state agenda.

But the unfunded tax cuts sparked a market rout and triggered a backlash from Tory MPs concerned that the government was focusing more on helping the rich than the lowest-paid.

New leaders aren’t supposed to face such heated internal opposition, but that’s what happened in Birmingham as senior Tories including Michael Gove pushed for a reversal to the axing of the top tax rate. Eventually the numbers became too great to resist.

That wasn’t good enough for two of her most senior colleagues, who openly expressed dissent. Home Secretary Suella Braverman told a side event on Tuesday she was “disappointed” by the U-turn, while Levelling Up Secretary Simon Clarke said Braverman was speaking “good sense.”

“When you’re in government you have the opportunity to feed your ideas straight to the top of the machine,” Foreign Secretary James Cleverly told Sky News on Wednesday. “It’s always best done around the cabinet table...that’s how I would do it.”

One Tory peer said they were dismayed to see Truss vow to stick to the abolition of the top tax rate on the BBC’s flagship politics show on Sunday, only to change course hours later. That was humiliating for MPs and ministers who had repeatedly defended the policy, they said, and reminded them of the many times Johnson had led them down a similar path.

Behind the scenes, there is frustration within the party that Truss has failed to keep her opponents close and instead appointed her supporters to top jobs. That has led to many unhappy backbenchers, one MP said, which could prove dangerous as she attempts to get her key policies through the Commons.

Meanwhile Truss is also facing pressure from colleagues over welfare spending. House of Commons leader Penny Mordaunt, a former leadership contender, told Times Radio on Tuesday that benefits should keep up with inflation -- after Truss said she was yet to decide on the issue.

All of which has left Truss -- on the eve of her big speech -- facing more questions about her survival than her vision. In the lobby conference hall, shelves stacked high with Tory merchandise sold out of the blue and white mugs emblazoned with “In Liz We Truss” by Tuesday afternoon. That could be a sign of support, or anticipation of what they might soon be worth on eBay, like Lehman Brothers baseball caps.

Her task has been made more difficult by nationwide train strikes, which may mean many delegates and MPs may have already departed before she gives her speech.

Pressed Tuesday by ITV on whether she was still in control, Truss insisted: “We do have a very clear direction and a very clear plan.”