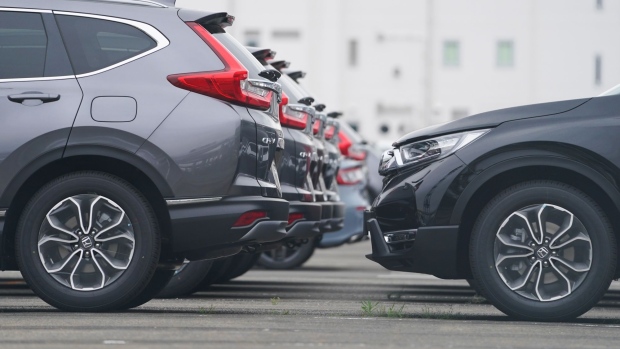 Honda Motor Co. CR-V sports utility vehicles (SUV) bound for shipment at a port in Yokohama, Japan, on Monday, May 9, 2022. Honda is scheduled to release earnings figures on May 13. , Bloomberg

Operating profit for the fiscal year through March 2023 will be 810 billion yen ($6.3 billion), the Japanese carmaker said in a statement Friday, compared with analysts’ average estimate for 943 billion yen. The outlook comes after Honda topped its own projections for the just-ended fiscal year with profit of 871 billion yen. Its guidance for last year was 800 billion yen, while analysts were estimating 820 billion on average.

While weaker yen has long been considered a boon for Japan’s blue-chip exporters, it’s now starting to damage Japanese automakers as material costs inflate for importers. Oil prices have soared amid Russia’s invasion of Ukraine. Covid lockdowns in China is also weighing on, with factories being forced to halt, causing further supply chain disruptions.

The damage done to supply chains outweigh the benefit of plunging yen, said Takeshi Miyao, an analyst at Carnorama. Even as autoamkers try to produce cars, “demand and supply are losing balance” due to Covid and the Russia-Ukraine war, he said.

Honda forecast net sales of 16.3 trillion yen for the current fiscal year. That compares with 14.6 trillion yen in the prior period and analysts’ average prediction for 16.2 trillion yen.

Honda shares rose 2.2% ahead of the earnings announcement.