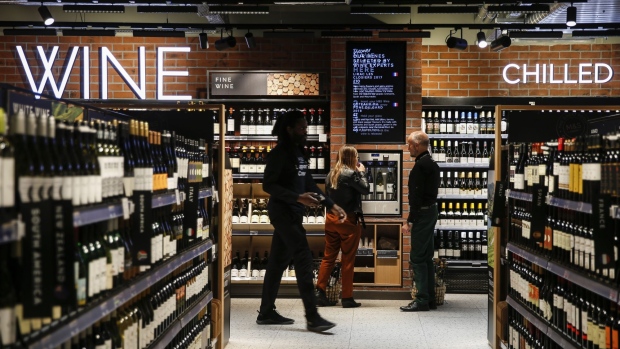 (Bloomberg) -- U.K. inflation unexpectedly slowed to a three-year low in December, clearing the path to a potential Bank of England interest-rate cut this month.

Consumer prices rose 1.3% from a year earlier, the least since November 2016, the Office for National Statistics said Wednesday. The core inflation rate posted a surprise fall to 1.4%.

The shock readings will fuel speculation about an imminent rate cut after dovish comments from BOE Governor Mark Carney and other policy makers in recent days. Money markets now see a more than 40% chance of a quarter-point reduction on Jan. 31.

Inflation has been below the BOE’s 2% target since August and economists expect it to continue to undershoot until at least the middle of next year, thanks in part to the appreciation of sterling last year.

That’s good news for the purchasing power of consumers, with wages now rising by more 3% a year.

But political turmoil over Brexit caused the economy to weaken sharply at the end of last year, and several BOE officials have said they could now join those already pushing for a rate cut if surveys taken after Boris Johnson's election win don't show a significant pickup.

In his first major speech of 2020, Carney said the Monetary Policy Committee has plenty of firepower to act if necessary. Silvana Tenreyro said she may support a rate cut if economic weakness persists and fellow MPC member Gertjan Vlieghe has warned he’d need to see an improvement to justify waiting to cut.

Michael Saunders, who along with Jonathan Haskel voted to cut rates in November and December, signaled he will continue his push this month. In a speech in Northern Ireland Wednesday, he predicted growth would remain subdued and called for “relatively prompt and aggressive” action.

Downward pressure on inflation last month came from the cost of overnight hotel stays. Prices fell 7.5%, with 11% of hotels questioned reporting discounts of more than 25%, the ONS said.

There was also pressure from clothing and footwear, underlining the competition facing high street stores. Price cuts were most pronounced in women's clothing, with 15% of all items reduced versus 11% a year earlier.

Other figures showed pipeline pressures remained subdued. Input prices fell 0.1% from a year earlier and output prices rose just 0.9%. House prices in November rose an annual 2.2%, the most in a year, with all regions except eastern England posting gains.

The London market, which has borne the brunt of Brexit uncertainty, rose 0.2% -- only the second annual gain since March 2018.

To contact the reporter on this story: Brian Swint in London at bswint@bloomberg.net

To contact the editors responsible for this story: Fergal O'Brien at fobrien@bloomberg.net, Andrew Atkinson