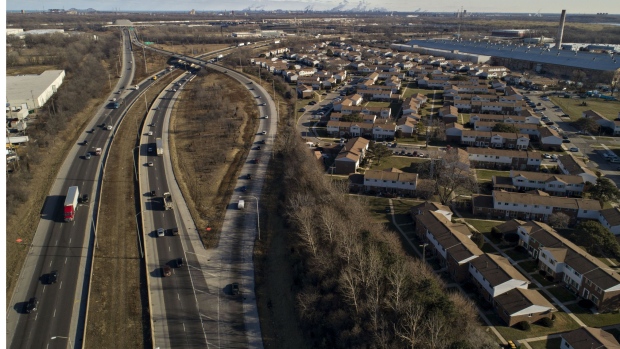 Vehicles travel past homes on the I-94 highway in this aerial photograph taken over Chicago. , Photographer: Daniel Acker/Bloomberg

(Bloomberg) -- Some wealthy Black families still live in U.S. neighborhoods with relatively low incomes and high rates of unemployment, suggesting other factors such as housing discrimination are at play, according to a Federal Reserve study.

Black households with high income and wealth still lack access to “opportunity neighborhoods,” which have good schools and an abundance of other working professionals, according to a new analysis by the Federal Reserve Bank of Cleveland. Black families live in neighborhoods with a considerably lower socioeconomic status than their White peers at each level of income distribution, the report said.

“Our findings indicate that, at least in terms of neighborhood sorting, we should view wealth as more of a consequence than a cause,” wrote researchers Dionisio Aliprantis, Daniel Carroll, and Eric Young.

The report’s findings highlight the Fed’s challenge of achieving its “broad and inclusive” maximum-employment goal. In the latest jobs report, Black unemployment was nearly double that of White Americans.

Black families with annual incomes of $175,000 tend to live in neighborhoods with similar unemployment rates as White households with incomes under $10,000, the report showed.

In choosing where to live, Black households may face a difficult tradeoff between cities with a larger share of other Black residents and greater economic opportunity. The report also suggests that discrimination in the housing market and ongoing racial hostility could explain racial distributions across neighborhoods.

“Making spaces that have traditionally been viewed as being for White people welcoming to Black people is not just about psychological safety, but also about economic opportunity,” the authors wrote.