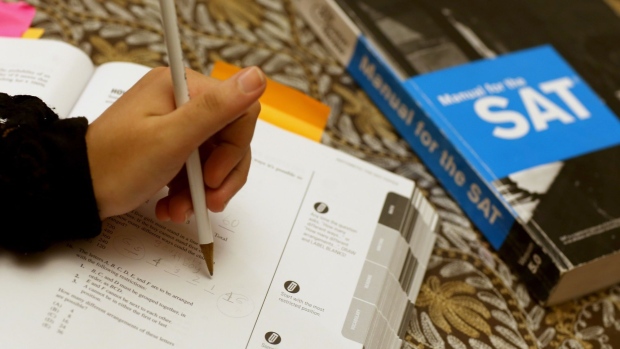 (Bloomberg) -- Wealthy college applicants submit SAT and ACT scores at a higher rate than their lower-income peers even as many colleges -- even the most selective -- have made such tests optional.

Some 53% of students in the wealthiest households submitted this school year, according to data from the Common Application, the non-profit behind the standardized application form. By contrast, only 39% of the poorest did so.

Figures broken out by socioeconomic status demonstrate “that more work is necessary to effectively engage and support students from across the country’s diverse communities in the college admissions process,” researchers wrote in a report issued Monday. The report reflects applications for the admission cycle through Jan. 17.

Yet as glaring as the differences are, the data show that, overall, test submissions among the rich and poor are declining from the 2019-2020 school year -- 78% of the wealthiest sent scores during that term, while 71% of the lowest income students did. The difference between the submitters grew over two years.

Colleges across the U.S. have made the requirement for standardized tests optional in part to level the playing field for lower-income students who may not have the same kind of access to test centers during the Covid-19 pandemic. The tests have also been long criticized for favoring richer students who can afford tutoring.

Applications among first-generation students -- those whose parents didn’t receive bachelor’s degrees -- grew by 20% from two years prior. And, poorer students are taking up on offers not to send scores. Among recipients of fee waivers, a proxy for income, 36% who received them sent in scores for 2021-22.

The Common Application saw a dramatic decline in the number of schools that asked for SAT or ACT scores this year. Only 5% of about 850 schools that are members of the organization requested the scores, compared to 55% in 2019.

While schools have said students don’t need to submit scores, it’s still not clear how test results are being used in admission decisions, and what percentage of admitted students sent in scores, said Jenny Rickard, executive director of the Common App and a former admissions chief at Bryn Mawr College.

Harvard, Yale and Princeton universities, for example, declined to provide data to Bloomberg last week about the number of test takers who entered their current freshman classes or were admitted in the early application round in December. Harvard last month said tests will be optional for several more years for students in eighth grade and that they won’t be penalized for not submitting them.

Rickard urged schools to release such data. “College admissions have suffered from a lack of transparency,” she said. “This is the moment for institutions to be transparent. Students are already trying to figure out whether they need to take the test.”

Still, applicants from public or private schools with more resources will likely continue to sit for the exams, said Matthew DeGreeff, dean of college counseling at Middlesex, a boarding school in Concord, Massachusetts.

“Testing can only help you, it can’t hurt you,” said DeGreeff, a former admissions officer at Harvard. “It can position you well as a candidate.”