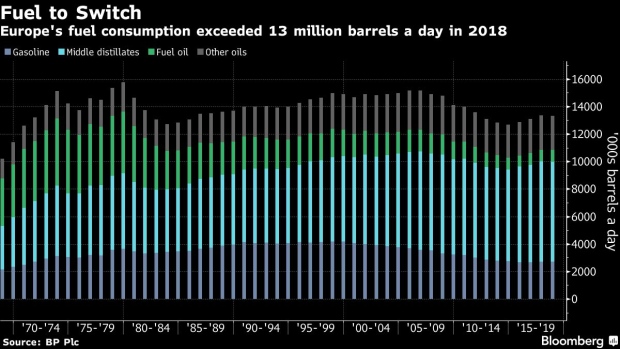 Oil storage silos stand at the oil and gas refinery operated by Naftna Industrija Srbije AD (NIS), a unit of Gazprom Neft PJSC, in this aerial photograph in Pancevo, Serbia, on Tuesday, April 28, 2020. Crude whipsawed near $11 a barrel after a major index tracked by billions of dollars in funds bailed out of near-term contracts for fear prices may turn negative again. Photographer: Oliver Bunic/Bloomberg , Bloomberg

(Bloomberg) -- Europe’s oil refining lobby has taken a shot at estimating what it might take to achieve the EU’s dream of carbon-neutrality by 2050. It won’t come cheaply.

It will cost somewhere between 400 billion and 650 billion euros ($735 billion) to produce the low-carbon liquids needed to help stop using oil-derived road fuels in Europe by 2050, according to a study released Monday by Fuels Europe, whose members include all the continent’s largest refiners. That figure also includes a 50% reduction in CO2 emissions from the aviation and shipping industries.

While several oil companies have already begun the task of evaluating how they might lower their own carbon footprints from operations, the study touches on a much more profound question: how can an entire infrastructure be transformed, and what alternative fuels might be developed, to meet the continent’s needs for decades to come.

“There’s no business-as-usual,” said John Cooper, director general of Fuels Europe. “Essentially, there is no petroleum refined in 2050,” he said, referring to the study.

To achieve the target, the study proposed the continued use of non-petroleum derived liquids, such as biofuels and synthetic hydrocarbons, to be used in conjunction with electrification and hydrogen-based technologies.

The path to greater carbon neutrality set out by Fuels Europe would require significant investment by the industry at a time when some companies are cutting jobs, and profits are being squeezed as a result of the demand hit caused by coronavirus. It will also need action by governments on issues such as taxation to encourage use of the new generation of clean fuels, which will cost more to produce.

While hydrogen and electricity will no doubt play a major role in Europe’s future energy mix, there’s still a requirement for liquid fuels, the lobby group said. A lot of the infrastructure needed, like pipelines and storage facilities, is also already in place.

Europe’s oil majors have started talking a lot more about carbon, outlining plans to invest more in renewable energy or projects that allow them to offset carbon emissions, such as Royal Dutch Shell Plc’s initiative to plant trees. Along with Total SA, BP Plc and Repsol SA, it has set carbon-reduction targets through 2050, even if there’s been very little detail on what that means for their oil-processing plants.

Fuels Europe’s proposal is for a combination of first generation and advanced biofuels along with synthetic hydrocarbons known as efuels, which combine emission-free hydrogen with carbon dioxide, producing a clean hydrocarbon. It also includes carbon capture and storage. The plan sees low-carbon liquids production of 30 million tons of oil equivalent annually in 2030 and 150 million tons by 2050. The report is primarily focused on fuels, rather than all oil products.

The new generation of fuels will be more expensive to produce, though more efficient vehicles will mean drivers need less of it, Cooper said. The proportion of biofuels blended into traditional fuels would gradually rise as the newer technology takes hold, and governments should be encouraged to tax that portion of road fuel at a lower rate to keep costs down for consumers. Fuels Europe’s proposals also include a dedicated cap-and-trade mechanism on emissions from road fuels.