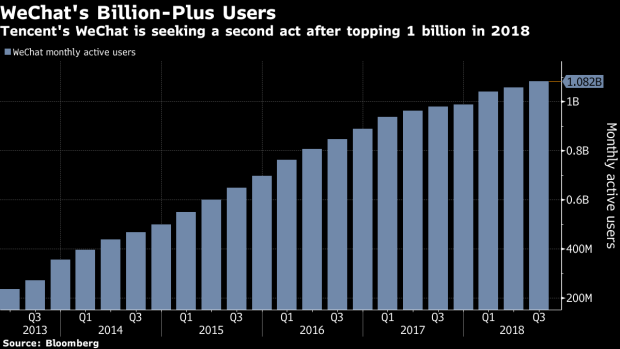 Allen Zhang, senior executive vice president at Tencent Holdings Ltd. and founder of the company's WeChat app, speaks during his keynote speech at the WeChat Open Class Pro conference in Guangzhou, China, on Monday, Jan. 15, 2018. WeChat, the social network that is nearly ubiquitous in China, said at the conference that it has 580,000 mini-programs in operation. Photographer: Qilai Shen/Bloomberg , Bloomberg

(Bloomberg) -- Allen Zhang stepped on stage to wrap up a long day of presentations at a Tencent Holdings Ltd. conference. Four hours later, the WeChat founder had methodically torn apart his own brainchild before mapping out the next act for China’s premier super-app.

Zhang, who commands a cult-like following in China thanks to WeChat’s explosive popularity, got an audience of thousands glued to their seats till nearly midnight last week. The usually reclusive executive, in a company known for low-key leaders, laid out a vision for how the platform used by a billion people should evolve: by emulating real life and social circles.

Zhang’s creation -- a mash-up of WhatsApp, Instagram, Facebook, Yelp, Paypal, Twitter and Kindle -- has become intertwined with the daily lives of just about every Chinese person. Yet he confessed WeChat risks becoming obsolete. It’s lost the veneer of authentic discovery that endeared it to users, because people were becoming too sensitive to their online personas on Moments (a feed akin to Facebook’s.)

The 49-year-old’s first step is deceptively simple: a video-streaming feature, not unlike Instagram’s feed, so people share their lives in real time, not through carefully curated photos and messages.

“WeChat will need to face new challenges in the next eight years,” Zhang said “Moments has become a very traditional place for social networking, as people use it to showcase the best of themselves to win recognition from others.”

Introduced in December, the video-streaming button -- a camera icon on the top right corner of the user profile page-- allows people to add emojis, text and music. Zhang sees it as the antithesis of Moments: even the “send” button is swapped with a nonchalant “this will do” to dampen anxiety.

“What we want is something that can let people record what they’re really experiencing, and let their friends see,” he said. “This process should not be like Moments. If it were, we wouldn’t be doing this.”

While Moments has grown users continuously for seven years and each day more than 45 billion messages are sent, Zhang is looking ahead. Many are starting to re-think how they showcase their personal photo and article-sharing history to new contacts as their phonebook expands. To counteract that anxiety, WeChat introduced a setting to let people display posts for just three days, a function now employed by more than 100 million.

“Allen really spent a lot of time trying to explain the philosophy behind the WeChat product during that four-hour speech,” said John Choi, an analyst with Daiwa Securities Group Inc. in Hong Kong. “It’s clear that they need to further enhance user engagement, as user growth is not going to be the key growth driver in the future.”

While WeChat has been the star of China’s internet for years, newcomers like Bytedance Ltd. are now making things harder. The owner of Toutiao, Douyin and Tik Tok has become the world’s most valuable startup.

“The much-reported cannibalisation of screen time from Bytedance’s apps are obviously hurting WeChat, and with little wonder,” said Mark Tanner, founder of Shanghai-based research and marketing company China Skinny. “WeChat needs to stay relevant for those hundreds of millions of users who just want something simple to use, that looks good and is entertaining and are used to newer, shinier things being launched.”

A red flag for the app is that readership for articles referred by friends on Moments has been dropping. Zhang conceded that WeChat’s algorithm-based referral feature is sub-par. So he introduced “Hao Kan” (or good-looking), letting users mark articles they’ve read as an alternative way to spread the word among friends.

“The way we mostly gather new information is not from the library or actively searching from the web but from people around us,” said Zhang. “In order to create a product that attracts the masses to read, it needs to be based on social recommendation, only then will this have a chance.”

As in real life, people also don’t hang out in one locale. Hence, Zhang envisions a plethora of satellite apps -- -- similar to the digital book service already in use -- which share functions and links to the main app but can stand alone.

“WeChat as an app has already featured many, many things,” he said. “But there’s a limit to how much it can hold.”

Complementing those initiatives will be a buildout of Mini Programs-- the lite-apps platform that already sits atop WeChat’s interface and provides quick access to services including restaurants and cinema bookings.

WeChat plans a recommendation system based on friends’ reviews, to help people discover products. Zhang hopes users in future can search within its ecosystem. For example, when a person looks up a flight, it directs them to an airline’s lite-app.

“We have the patience to nurture it slowly,” said Zhang.

To assure third-party developers, Zhang insists WeChat won’t play favorites or direct traffic to Tencent’s portfolio companies, while acknowledging the company hasn’t operated as fairly as it could have in the past. That stance has been a point of contention within Tencent, with staff from other divisions often complaining about how WeChat is run like a dictatorship. Zhang said if he didn’t rule the roost, the product would lose its soul.

“I’ve always regarded myself as a product manager and not a professional manager,” he said. “A good product needs a dictator, otherwise if too many opinions are involved, the product will fall apart.”

It remains to be seen whether Zhang’s vision will prevail. WeChat has kept its dominance in a sea of rival Chinese apps in part because it maintained a clean interface and hasn’t bombarded users with ads and alerts.

Take Zhang’s insistence on never changing WeChat’s welcome screen, which shows a silhouette of a lone person looking up at a vast depiction of planet Earth.

“Every time you see the loading page of WeChat, you’ll think ‘what is this person doing? What is he doing in front of planet Earth?” Zhang said. “One billion users will have one billion interpretations and find something that moves them.”

To contact the editors responsible for this story: Robert Fenner at rfenner@bloomberg.net, Edwin Chan