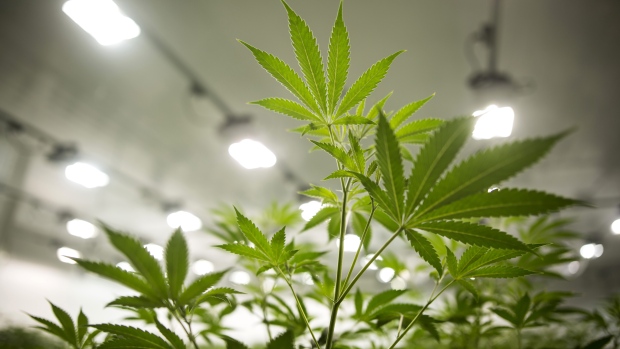 In a down-and-out Canadian town, Bruce Linton dreamed of transforming an abandoned Hershey Co. chocolate plant into the Next Big Thing, a medical marijuana factory. But the pot entrepreneur faced a crisis typical of his edgy industry: Banks shut their doors in his face.

It began with Royal Bank of Canada. The 148-year-old blue-chip company dropped him as a customer when it discovered he ran with the cannabis crowd. “We must regretfully inform you,” read the financial Dear John letter he was sent. Toronto-Dominion Bank, Bank of Montreal — they stiffed him, too. He queried Bank of Nova Scotia and Canadian Imperial Bank of Commerce. No luck.

Scouring Google, Linton lowered his sights, but the rejections kept piling up, like roaches at a Grateful Dead concert. No “respectable” bank wanted to take a chance on an untried business selling a product with the whiff of vice.

Then Linton turned to an old-school credit union — that paragon of community, rectitude, and caution — and found a middle-aged banker named Rob Paterson. The chief executive officer of Alterna Savings & Credit Union Ltd. seemed an unlikely mark. He barely drank and hadn’t smoked a joint since his university days.

Paterson was headed out to his car in the parking lot at Alterna’s Toronto office when one of his lieutenants caught up to him and said, “You won’t believe what’s come to us — a weed company.”

Initially, Paterson dismissed the idea. But then, like any good banker, he hit the books. He and his crew spent several months studying Linton’s business plan. They scoured the regulations on medical marijuana and even interviewed doctors. Paterson was impressed. He came back to his team and declared: “Look, why would we not do this business?” The marijuana company with the funky name, Tweed Inc., had found its bank.

That was three years ago. Since then, Paterson has become the go-to banker for the pot industry, and his first cannabis customer, Linton, the no-longer-desperate marijuana executive, is proud to show off his 650,000-square-foot pot facility in Smiths Falls, Ont. — a burg of 8,885 slowly rebounding from the shutdowns of the Hershey and Stanley Works tool plants a decade ago.

“Chocolate Shoppe,” proclaim the golden letters on an interior wall — put there as a tribute to past glory — but Linton’s operation, now demurely christened Canopy Growth Corp. (WEED.TO), bristles with high-tech equipment; the production area requires a fingerprint scan for access. Inside, rows of lush marijuana plants will be harvested and dried and become fodder for joints and pipes as well as refined into oils for soft-gel capsules to treat chronic pain, nausea from cancer treatment, sleep disorders, and anxiety.

Canopy Growth is the world’s largest publicly-traded marijuana producer, with a market value of more than $6 billion. But its ticker, WEED, is true to its roots, and, similarly, Linton hasn’t forgotten Paterson and the credit union that made it possible. “I’ve been a walking brochure for them,” he says.

The times may be changing for the pot business as countries around the globe shift from locking up dealers to passing legislation for legalization. But banking remains a serious hang-up for an industry that’s set to generate US$31.4 billion in annual sales by 2021, according to Brightfield Group, a Chicago-based research firm.

In the U.S., marijuana dispensaries have been known to tote bags of cash around to banks to make deposits. That exposes couriers to robbery, gives the businesses a taint of the illicit, and spooks banks that remain wary of the nascent industry following U.S. Attorney General Jeff Sessions’s promise to enforce federal laws banning the plant. “If you’re a major institution, life’s too short to take a risk of being in violation of United States federal banking laws,” says Christopher Barry, a Dorsey & Whitney LLP attorney who advises cannabis companies on cross-border financing and regulatory issues.

In this uncertain environment, Canada may offer the sharpest glimpse of the future — and the business opportunities — for financial-services companies willing to take the risk. In 1999, Canada began to allow legal access to medical marijuana. Even so, the industry didn’t take off until 2013, when the government changed regulations to make it simpler for companies to enter the market. At least 20 countries — Australia, Germany, and Mexico among them — and 29 U.S. states have followed suit.

Now comes legalized recreational pot. Nine U.S. states and the District of Columbia have taken the step. This year, Canada will become the first country to do so since Uruguay in 2017. Already, Canada has the largest herd of “cannabis ­unicorns” — fledgling publicly-traded companies worth US$1 billion or more — such as Canopy, Aurora Cannabis (ACB.TO), and Aphria (APH.TO). Canadian stock exchanges host at least 85 pot companies, with a combined market value of $30 billion.

As for Alterna, it now has about $750 million in pot-related loans and deposits. Paterson estimates he banks two-thirds of the almost 100 licensed producers in the business, and Linton isn’t the only one spreading the word. “We’re getting a lot of referrals from accounting and law firms,” Paterson says. “The call to me is always, ‘Hey, hope this doesn’t sound crazy, but I’ve heard you guys are in this industry, and I have a client who’s great but they’re having trouble getting banking services.’ ”

In 2016, when word of Alterna’s involvement in the pot banking business started getting out, Paterson expected a backlash, but he encountered none.

Still, Kevin Sabet, a former White House drug policy adviser under Presidents George W. Bush and Barack Obama, says banks should steer clear of an industry that remains illegal in much of the world and seeks to profit from a harmful drug. “You now have a financial system with all of its backing promoting an industry that is trying to get rich off of addiction,” says Sabet, co-founder of Smart Approaches to Marijuana, a nonprofit that opposes legalization. “From a public health point of view, that’s a very bad idea.”

Others wonder whether Paterson’s fortunes have peaked: The major banks are starting to circle. Bank of Montreal and Toronto-Dominion have quietly been providing some banking services. Even Royal Bank and Scotiabank, which have been steadfast in not helping the industry, now say they’re open to reviewing policies as the laws change.

David Baskin, president of Toronto-based money manager Baskin Wealth Management Inc., which has long owned big-bank shares, says the established institutions have so much market power that credit unions such as Alterna can’t hope to match them. “They’ll get left in the dust,” he says.

When Paterson isn’t flying across Canada to meet pot executives, he sometimes works from Toronto out of Alterna’s squat, 1970s brown-brick building in an office park near Canada’s busiest airport. (Alterna is headquartered in Ottawa.) It’s a far cry from Paris, where he was born in 1967, the youngest of three sons, to a Canadian mother and a Scottish father who was working there as an executive for International Business Machines Corp. Following a stint in Hong Kong, the family moved to Canada in the mid-1980s. At the University of Western Ontario in London, 110 miles southwest of Toronto, Paterson majored in philosophy and, like so many of his classmates, did a little weed. “It was something every one of us did, experimented in one of the residences, and passing to the left, you know,” he says. “That was it.”

After university, Paterson spent 15 years at Canadian Imperial Bank of Commerce before working in Asia as a McKinsey & Co. consultant and returning to Canada to join JPMorgan Chase & Co. In 2013, when he was an executive vice president at risk manager Aon Plc in Toronto, a recruiter called with a lead: Would he like to try to turn around Alterna, an underperforming credit union? He took the CEO job in April, slashing 10 per cent of operating costs in his first 100 days. Paterson, who had a lifelong interest in tinkering with computers, also embraced digital banking.

Alterna’s assets have almost tripled since Paterson joined, climbing to $6.6 billion as of Dec. 31, and it’s become one of Canada’s 10 largest credit unions. In 2016, Paterson earned $985,000 from Alterna, making him one of the better-paid heads of Canadian credit unions (though his compensation was about a 12th of that of Royal Bank’s David McKay, the highest-paid bank CEO in the country). That year, the latest period available, Alterna’s annual profit almost tripled, to $16.3 million, compared with the year before.

Paterson’s sparsely-furnished ground-floor corner office in Toronto overlooks the parking lot where it all began — or where at least the weed part did. Alterna has a team of six commercial bankers who specialize in the marijuana industry, with clients in British Columbia, Alberta, New Brunswick, Quebec, and Ontario. Paterson has visited at least 20 of the country’s largest cannabis complexes. He’s got final say on the deals. “We can tell someone who’s sophisticated and has the capability to survive and go through the whole process from those that aren’t,” he says.

As a credit union, Alterna can’t offer one-stop shopping. It can do checking and savings accounts, cash management, and credit cards. As its client companies in the marijuana business grow, Paterson will make loans of $5 million to $25 million at interest rates 2.5 percentage points to 5.5 percentage points above five-year Canadian government benchmarks, which is about what he’d charge a customer in the real estate business. But for mergers and stock sales, marijuana concerns must look to weed-oriented investment banks such as Canaccord Genuity Group, GMP Capital, and Eight Capital.

Does the gap in business offerings mean that Alterna could, in fact, get left behind? In January, Bank of Montreal became the first major bank to arrange a stock sale for a company tied to pot. Its capital markets division helped lead a $200.7-million equity financing for none other than Canopy Growth, Paterson’s first pot customer. CIBC, Paterson’s old employer and Canada’s fifth-largest lender, was part of a $20-million credit deal signed last year with producer MedReleaf Corp. Relatively small though it was, that deal was a milestone: It marked the first time a Big Five Canadian bank made a loan to the industry.

Although they’ve shied away from pot, U.S. lenders regularly call Paterson for advice on the market he pioneered in Canada. He’s happy to help them plot their strategy south of the border. He’s also heard from some of those Canadian banks that turned down his first client when it was desperate for help for the chocolate factory overhaul. When those calls come in, he gives the titans a taste of their own medicine. With characteristic Canadian understatement, Paterson says, “We don’t tend to be so helpful.”