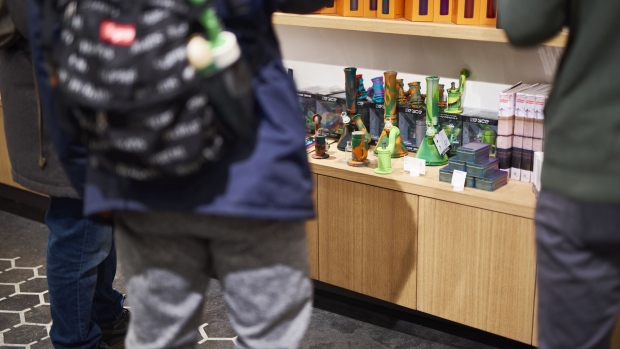 Customers view merchandise displayed for sale at the Higher Standards LLC store in Chelsea Market in New York, U.S., on Tuesday Dec. 11, 2018. Higher Standards, a Miami-based company that makes marijuana accessories, launched its first retail location a year ago inside the Chelsea Market, which draws thousands of local foodies and tourists heading west to the High Line. , Bloomberg

(Bloomberg) -- Companies across industries are chasing an attractive new demographic. These dream customers are more likely to own pets and to love fashion, to want kids and to consider starting their own business. They also make quite a bit of money -- and are still spending it during the pandemic.

Who is this ideal mystery consumer? None other than the cannabis user, once viewed as an anti-materialistic layabout. They’re so attractive a demographic, in fact, that some consumer-goods and technology companies are actively courting them as customers.

That’s been the case at Uber Technologies Inc., which hired cannabis advertiser Fyllo late last year in its first attempt to specifically target pot users when advertising its food-delivery service, Uber Eats. And it’s not just about serving people who have the munchies after smoking marijuana, says Uber’s global head of media, Travis Freeman.

“A cannabis consumer is younger than the normal consumer, has more disposable income; they are busier than most, they are working all the time, exercising all the time, going on adventures all the time,” Freeman told me in an interview. The results have been good: Uber has found that cannabis users are more likely to watch and complete video ads than the average consumer.

Fyllo, the specialist in cannabis advertising working with Uber, said other companies from outside the marijuana industry are also trying to tap into this enticing demographic. The growing interest helped Fyllo close a $30 million funding round last week.

“We’re seeing a lot more mainstream brands,” Fyllo Chief Operating Officer Katie Ford said of the new breed of customer seeking out its services. “Some of the biggest alcohol companies want to target the cannabis consumer. Our platform allows them to do that.”

Of course, some consumer-goods companies are targeting cannabis consumers for a different reason: They’re losing their slice of the pie and looking for a way to recoup losses.

“A beverage or liquor brand would want to target them because they’re losing market share,” said Fyllo CEO Chad Bronstein. “This is a way for them to keep talking to the consumers.”

“There’s a gray space between CBD wellness and recreational cannabis. We want to move into that fast growing space of high CBD and low THC products. I see cannabis wellness as the fourth leg after recreational marijuana, medical marijuana and CBD,” Deanie Elsner, chief executive officer of Charlotte’s Web, said in an interview with Bloomberg News.