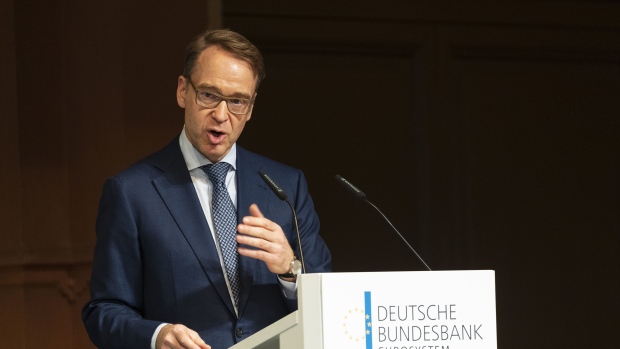 The two Governing Council members were concerned about wording that can be seen as making too much of a long-term commitment to loose monetary policy, the people said.

Other officials agreed to the forward guidance on the condition that it only affects interest rates, not asset purchases, according to one official.

The ECB decided on Thursday to revise its guidance on when interest rates might rise to convince investors it won’t withdraw support too hastily. The key change means that even if inflation is at the target at the end of the forecast horizon -- up to three years out -- officials won’t be forced to respond with tighter policy. The ECB currently foresees price growth averaging just 1.4% in 2023.

The move follows an 18-month strategy review, which aimed to strengthen long-running efforts to push up inflation. Weidmann and Wunsch both signed off on the review earlier this month, which acknowledged that inflation could overshoot when the ECB makes a “persistent” push to escape interest rates that are almost as low as they can effectively go.

Weidmann said after the review that the ECB won’t deliberately seek higher inflation rates to make up for previous undershoots, and “that was important to me.”

President Christine Lagarde said in a news briefing that there was no unanimous backing for Thursday’s decision, though an “overwhelming majority” was behind it. The rest of the ECB’s policy tools, including its bond-buying programs, were left unchanged at the meeting, which was the first after it raised its inflation goal to 2% from just-under 2%.