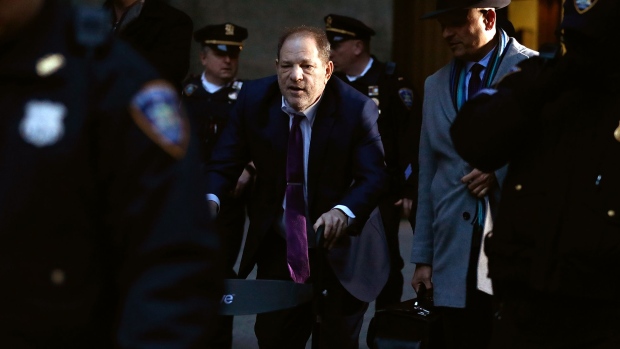 (Bloomberg) -- A London lawyer for disgraced media mogul Harvey Weinstein lost a bid to dismiss claims that he used confidentiality agreements to silence a former employee who brought claims of sexual assault.

Allen & Overy’s Mark Mansell is fighting a British regulator’s assertions that he negotiated a contract that prevented former staff from reporting a sexual assault to the police. But in a preliminary ruling, the Solicitors Disciplinary Tribunal said it was not an unreasonable allegation.

Lawyers for Mansell “had been unable to establish that there was no case to answer,” the tribunal said as it indefinitely delayed a full trial because of Mansell’s ill health. His lawyers had applied to dismiss the suit.

The case attracted significant attention after Zelda Perkins, a former assistant in the London office of Weinstein, broke her non-disclosure agreement more than three years ago to speak out about alleged sexual harassment by the Hollywood producer.

She said her settlement agreement meant she “couldn’t speak to my family, my friends, a doctor, a therapist,” or even talk to attorneys outside the case about whether the deal was legal and could be enforced.

The tribunal noted that Perkins and another member of staff were not allowed to keep a copy of the agreement.

The case was also the focal point for a renewed focus on the misuse of gagging orders in the wake of the #MeToo movement, with U.K. regulators stepping up efforts to hold financial firms and managers accountable. The alleged assault occurred more than 20 years ago.

“There’s no argument that there is a case to be answered,” Perkins said in response to the ruling. “There is no place for NDAs. The only time they’re useful is to protect commercial secrets, that is the only time they’re appropriate, but they’re creeping into everything.”

Mansell is set to retire from Allen & Overy in April. His lawyer said the charges were misconceived. “The principles of the settlement deal were agreed before our client was involved; he was brought in simply to document it,” John Gould said in a statement.

A Bloomberg News analysis of a public database revealed that sex discrimination suits were dropped more than 60% of the time before allegations were made public by British courts and judges could issue a ruling.

Lawyers for Mansell had argued that the NDA never explicitly prevented staff from going to the police. They said the contract never referred to a serious criminal offense, and thus it didn’t stop staff from reporting a crime.

Mansell was named by the Solicitors Regulation Authority, which was prosecuting the case at the tribunal. In the context of a serious allegation of sexual assault, “a lawyer acting for an employer was guilty of misconduct,” it said in a statement on its website.