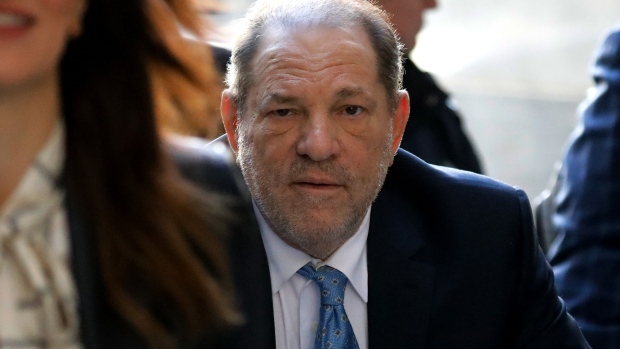 Harvey Weinstein, former co-chairman of the Weinstein Co., center, arrives at state supreme court in New York, U.S., on Monday, Feb. 24, 2020. Jurors at Weinstein's trial are set to resume deliberations Monday after signaling they are at odds on the top charges, AP reports. , Bloomberg

(Bloomberg) -- More than half a dozen women who say they were assaulted or mistreated by Harvey Weinstein are asking a federal judge to approve a $18.9 million settlement they reached with the disgraced movie mogul.

The females actors and screenwriters sued in December 2017, alleging Weinstein Co., its officers and directors and Miramax, the studio Weinstein formerly ran, enabled his conduct. Weinstein is currently serving a 23-year sentence for sex crimes at a maximum security prison in upstate New York.

U.S. District Judge Alvin Hellerstein last year threw out most of the claims in the lawsuit, including those alleging violations of the Racketeer Influenced and Corrupt Organizations Act, or RICO. What remained were claims against Harvey Weinstein himself for violations of the Trafficking Victims Protection Act.

Weinstein reached a tentative $47 million agreement to resolve many of the civil lawsuits against him in December, with the money to be paid by his insurance company, people familiar with the situation said at the time. About a third of the funds would go to lawyers, the people said. More than 30 actresses and former company employees would share in the settlement, which wouldn’t require Weinstein to admit wrongdoing or pay any money personally, the New York Times reported.

Elizabeth Fegan, an attorney for the women who sued in New York, said at a hearing last week that the settlement would resolve claims against Weinstein, former representatives of the Weinstein Co. and other companies that he worked for or founded. Weinstein Co. was sold out of bankruptcy in 2018 to Lantern Capital Partners for about $440 million, including debt. Hellerstein has set a July 14 date for a hearing on the settlement.

The women will submit claims and a court-appointed administrator will determine whether the claims are credible and how much the women should receive “based on an assessment of harm” to each.