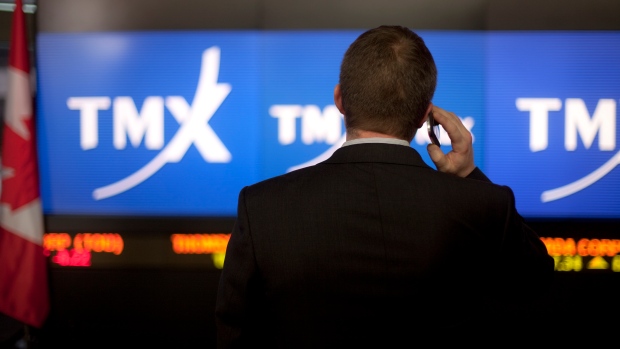 Kris Backus, manager of the TMX Broadcast Centre, talks on his cell phone in front of a screen displaying TMX Group Inc. signage and stock prices in this arranged photograph at the Toronto Stock Exchange (TSX) in Toronto, Ontario, Canada, on Tuesday, Feb. 19, 2013. , Pawel Dwulit/Bloomberg

Dye & Durham Ltd., a provider of software for legal and business professionals, rose 76 per cent in its Toronto trading debut after raising $150 million (US$110 million) in its initial public offering.

The share sale valued Dye & Durham at about $310 million, based on 41.3 million shares outstanding.

The timing for the IPO couldn’t have been better. Tech stocks in Canada and the U.S. have surged this year as investors piled in amid expectations of a stronger growth outlook compared with other sectors during the Covid-19 pandemic.

Shopify Inc. has more than doubled this year to become Canada’s most valuable company, surpassing Royal Bank of Canada. Technology is the top-performing sector on the Canadian benchmark by far, rising 59 per cent this year.

The firm, which sells its products in Canada and the U.K., has more than 25,000 clients including law firms, financial service companies and government organizations.

Some of Canada’s largest law firms and several of the nation’s banks are customers. Dye & Durham has been led by Chief Executive Officer Matthew Proud since 2014 and he has expanded the company through more than a dozen acquisitions in Canada, the U.K. and Ireland during his tenure.

A group of banks led by Canaccord Genuity Group, Bank of Nova Scotia, Bank of Montreal and INFOR Financial Group Inc. managed the deal and have the option to sell an additional 3 million shares at the IPO price, which would raise the total to $172.5 million.