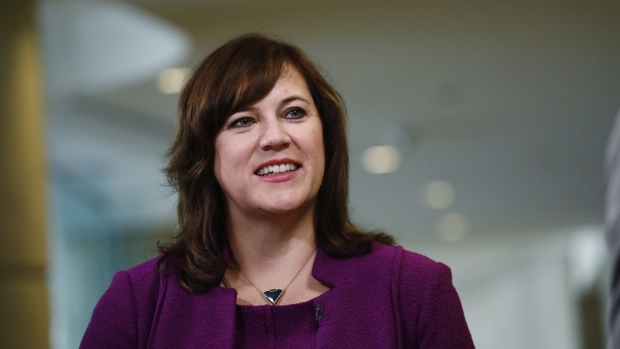 Hired after college by Wellington Management in Boston as an administrative assistant, she rose through the research and portfolio-manager ranks over three decades. In June, she takes over as chief executive officer when Brendan Swords leaves the closely held company, which traces its roots to 1928.

The Boston-area native and daughter of blue-collar Irish immigrants will be the first woman to lead Wellington, which manages more than $1 trillion. She joins a growing list of female CEOs overseeing some of the world’s biggest money managers, a group that includes fellow Bostonian Abby Johnson at Fidelity Investments.

Hynes, 52, faces a challenge as investors industrywide have been fleeing stock- and bond-pickers for cheaper index-tracking funds for years. Wellington is best known for serving institutional clients and sub-advising active mutual funds for firms such as Vanguard Group. It also has a growing, $32 billion business in alternative assets including private equity.

Hynes understands the task ahead. Wellington’s relationship with its biggest client, indexing giant Vanguard, dates to the 1970s. She’s the lead portfolio manager of the $49 billion Vanguard Health Care Fund, which had net outflows for the fifth straight year in 2020, according to data compiled by Bloomberg.

In excerpts from a Bloomberg interview, Hynes discusses active management, private equity and lessons she can offer other women on Wall Street.

With outflows from active stock funds surging, why are you confident Wellington can thrive amid a secular shift?

This goes back to our true north, our belief in investment excellence. If we can consistently deliver alpha over a long cycle for our clients, we believe we will gain share even if active management is losing share. Secondly, with bond yields being where they are, alpha will be an increasingly important part of how clients achieve their investment goals. Active has a place -- maybe an even more important place -- going forward. We have all the ingredients to deliver that alpha.

Five or six years ago we launched our first private fund, which was a late-stage growth fund. And we just raised the third vintage of that fund. That’s very exciting for us. When you think about how more companies are staying private longer, when they would have gone public, it’s a just very close adjacency to what we do on the public side. We also launched our first vintage of our biomedical fund two years ago. Both of those strategies have been successful, so I would expect us to continue to invest in that area, where we have the talent.

You earned an economics degree at Wellesley College. Why did you take a job as an administrative assistant?

I interviewed for two jobs, one with a better title and then Wellington, which was an admin job. But I did know coming in that I would be doing some research-associate work as well. Ultimately it was the people -- I really liked the people I was going to be working with. And there was a recruiter, I often say I wish I could go back and find her. She was very persuasive and would say, ‘This company’s special. You’re going to have lots of growth paths.’ So I just took a chance that she was right and it turned out to be true.

What lessons can you share from rising the ranks as a woman and the mother of four daughters?

When I had my first child back in 1998 I remember going to my manager, telling him I was having a baby. He was very supportive and said, ‘You can continue on your path or if you want you can take a different path.’ I also remember the CEO at the time coming to me and saying, ‘You’re 24-7 in your head,’ which, as investors, you are 24-7 in your head, but that doesn’t mean you have to be in the office. Wellington gave me tremendous flexibility. My husband and I worked out a schedule that worked. I was in really early and left at 4 p.m. for a decade. But nothing stays the same. Wellington has allowed me to adapt to changes. From a personal philosophy, there were a couple of things that were important. Being at dinner. My daughters were my truth-tellers. After I became managing partner, I thought everything was fine until I asked them how things are going and they said, ‘You’re not at dinner enough.’

You’ve decided to remain a portfolio manager even as you take over as CEO. How can you balance both roles?

I need to be very organized and deliberate. I have mapped out how I’m going to spend time on the firm as well as on my health-care research. We did name a president for the first time, Steve Klar. I’m going to be very focused on the investment platform. He’s going to be focused on our clients and infrastructure platform. When you think about Wellington, we only do one thing: We manage money for clients. And so me remaining an active investor will allow me to remain close to that, the nexus of what we do. Very close to talent. And as I evolve as an investor, how do I help other investors evolve? It will help me stay close to initiatives, how we’re going to help talent evolve.