The banks would sail through a possible recession and are attractive buys: Chuck Lieberman

Wells Fargo & Co. shares rose as the Federal Reserve’s interest-rate increases improved lending income and margins that had suffered during years of historically low borrowing costs.
Net interest income -- revenue from customer loan payments minus what’s paid depositors -- rose 16 per cent to US$10.2 billion, the San Francisco-based bank said in a statement Friday, matching what analysts were expecting. The bank’s net interest margin widened to 2.39 per cent from 2.02 per cent a year earlier.

The Fed’s rapid rate increases, intended to tamp down surging inflation, have made banks’ core lending businesses more profitable, even while they threaten to squelch consumers’ demand for loans. Wells Fargo’s net interest income is expected to rise 20 per cent this year, the bank said in a presentation.

“Net interest income will be driven by a lot of factors, but higher loan balances and higher rates are definitely helping us have a better result there,” Chief Financial Officer Mike Santomassimo said on a conference call with reporters Friday.

Wells Fargo’s overall profit trailed analysts’ estimates, hurt by a decline in mortgage lending and a US$576 million impairment of equity securities, predominantly in its affiliated venture capital business.

Mortgage-banking income fell 79 per cent to US$287 million in the quarter. That missed analysts’ US$392.4 million estimate and helped bring second-quarter net income down to US$3.12 billion, below the US$3.19 billion analysts had expected.

Rising rates already have sharply reduced the number of customers refinancing their mortgages and have weighed on home-sales activity as well, Santomassimo said. 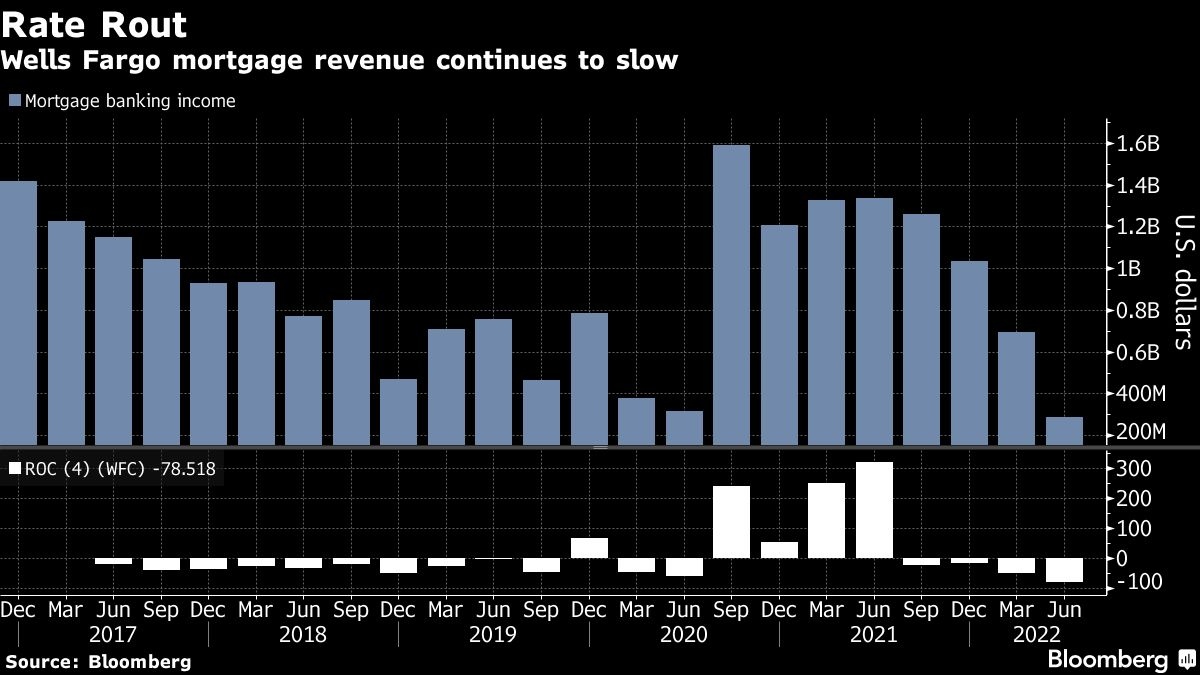 “It will be a challenging market in the mortgage business for the next couple quarters as things start to stabilize and we see where the path of rates are going to go,” Santomassimo said. Wells Fargo is among firms that have been laying off and reassigning staff in its mortgage division.

The lender reported a US$580 million loan-loss provision, more than the US$414.7 million analysts had expected. That marks a turnaround from a year earlier, when a US$1.26 billion release of provisions padded results.

The report offers another look at how the biggest US lenders fared through a quarter marked by rate hikes, persistent inflation and recession fears. Rival JPMorgan Chase & Co. temporarily suspended share buybacks and reported second-quarter results that fell short of analysts’ estimates on Thursday, driving its shares down 3.5 per cent.

At Wells Fargo, non-interest expenses totaled US$12.9 billion in the quarter, down 3.4 per cent from a year earlier while higher than analysts expected. Cost-cutting has been a key part of Chief Executive Officer Charlie Scharf’s plan to remake the firm since taking over almost three years ago, including by trimming the workforce. Headcount fell to 243,674 at the end of the second quarter, from 246,577 three months earlier.

Wells Fargo also remains under a costly Fed-imposed asset cap limiting its size to its level at the end of 2017. Period-end assets declined 3.3 per cent from a year ago to US$1.88 trillion.