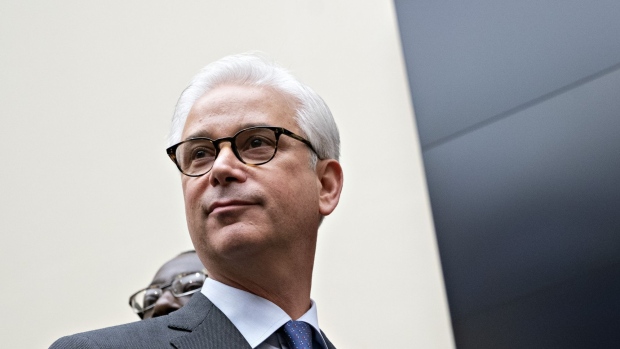 (Bloomberg) -- Wells Fargo & Co. plans to cut its dividend, breaking with several rivals, after the Federal Reserve said last week it would set restrictions on the payouts.

“There remains great uncertainty in the path of the economic recovery and though it’s difficult to accurately predict the ultimate impact on our credit portfolio, our economic assumptions have changed significantly since last quarter,” Chief Executive Officer Charlie Scharf said Monday in a statement.

Wells Fargo said it would announce on July 14 how far the current 51-cent payout would drop. Analysts estimate it will fall to about 35 cents. A reduction was widely predicted after the Fed said it would restrict payouts to a formula based on earnings, which have plunged at Wells Fargo in recent quarters.

In releasing the results of its annual stress test on the industry last week, the Fed capped dividends at the largest 33 banks at current levels. The central bank said it might conduct another exam using a harsher economic scenario later this year, limiting firms’ ability to gauge prospects for dividends for the rest of the year.

The Fed has also told companies they can’t resume buybacks, which were suspended in March to preserve capital as the Covid-19 pandemic was spreading. While the industry fared well in the central bank’s annual review, the new limits were meant to restrict the distribution of capital at a time when the economic recovery looks uncertain.