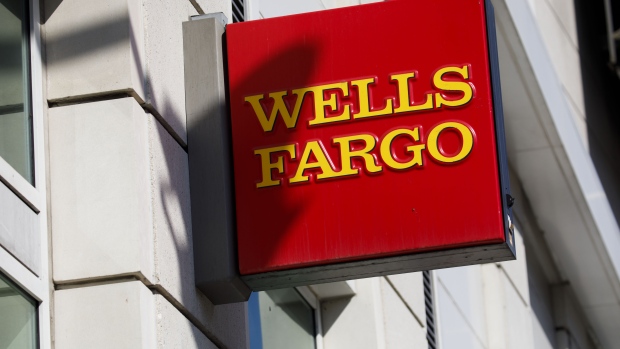 Signage is displayed outside a Wells Fargo & Co. bank branch in Los Angeles, California, U.S., on Thursday, April 19, 2018. Wells Fargo & Co.'s financial ties to gunmakers and the National Rifle Association have prompted the American Federation of Teachers to remove the bank from its list of recommended mortgage lenders. , Photographer: Patrick T. Fallon/Bloomberg

Wells Fargo & Co. hasn’t yet fixed all of its problems, but at least it stopped its revenue slump.

The bank posted a surprise increase in revenue, with the figure rising to US$21.9 billion in the third quarter, after analysts expected a slight decline. The bank benefited from rising interest rates and saw growth in consumer-lending originations in areas such as auto and personal loans.

It’s the first time this year revenue has grown and may indicate that Chief Executive Officer Tim Sloan’s efforts to turn Wells Fargo around are paying off. The lender has posted muted results in the wake of a series of consumer scandals that erupted in 2016 when the bank disclosed it may have opened millions of accounts on behalf of customers who didn’t want them, and the Federal Reserve has prohibited Wells Fargo from increasing assets until missteps are fixed to the regulator’s satisfaction.

Shares of San Francisco-based Wells Fargo climbed 2.3 per cent to US$52.60 at 8:27 a.m. in early New York trading. They closed at US$51.44 on Thursday and have dropped 15 per cent this year, compared with a 5.1 per cent decline in the KBW Bank Index.

Still, net income rose less than analysts expected. It climbed to US$6 billion, or US$1.13 a share, missing the US$1.18-a-share average estimate of 28 analysts in a Bloomberg survey.

Shrewsberry said at a September investor conference that the drop in loans is related to competition across consumer and commercial categories, not the Fed’s asset cap.