Feeling of alienation in Western Canada is high: Stockwell Day

Canadian consumer sentiment worsened through October amid rising uncertainty about the economic outlook, and as westerners come to grips with an election that handed a second term to Justin Trudeau’s Liberals, a result perceived as potentially bad for the energy industry.

The Bloomberg Nanos Canadian Confidence Index — a composite gauge based on weekly telephone polling — ended October at 56.7, down from 57.8 at the end of September. The economic mood index for the resource-rich prairie provinces dropped 3.8 points from the previous month to the lowest level since May, with most of that decline coming in the two weeks following the Oct. 21 election.

Although they returned to power with a minority government, Trudeau’s Liberals were completely shut out of of Alberta and Saskatchewan, where discontent with the federal government’s approach to resource development is strongest. The ongoing delays facing the completion of the Trans Mountain pipeline expansion project have been a particular sore spot in Alberta, which has struggled since the collapse of oil prices at the end of 2014. The province suffered another blow last week when Calgary-based Encana Corp. — one of the country’s marquee companies that traces its roots back to the 1800s — announced plans to move its headquarters to the U.S. and drop the link to Canada from its name.

McCreath: Encana CEO's 'egregious' compensation was a factor in the company's redomiciling

BNN Bloomberg Commentator Andrew McCreath weighs in on Encana's decision to redomicile to the U.S. and why he thinks Doug Suttles' pay check was a factor in the company's move.

Still, uncertainty about the economic outlook is widespread across the country — 13 per cent of respondents said they don’t know if the economy will be stronger, weaker or remain unchanged over the next six months, the highest level on record. That coincides with a slowing world economy and elevated trade tensions.

Last week the Bank of Canada shifted to a more dovish stance. Governor Stephen Poloz said policy makers had discussed and then rejected an “insurance” cut to interest rates to buffer the global weakness.

Consumers also reported less confidence about their pocketbooks, with readings dropping to the lowest since May. 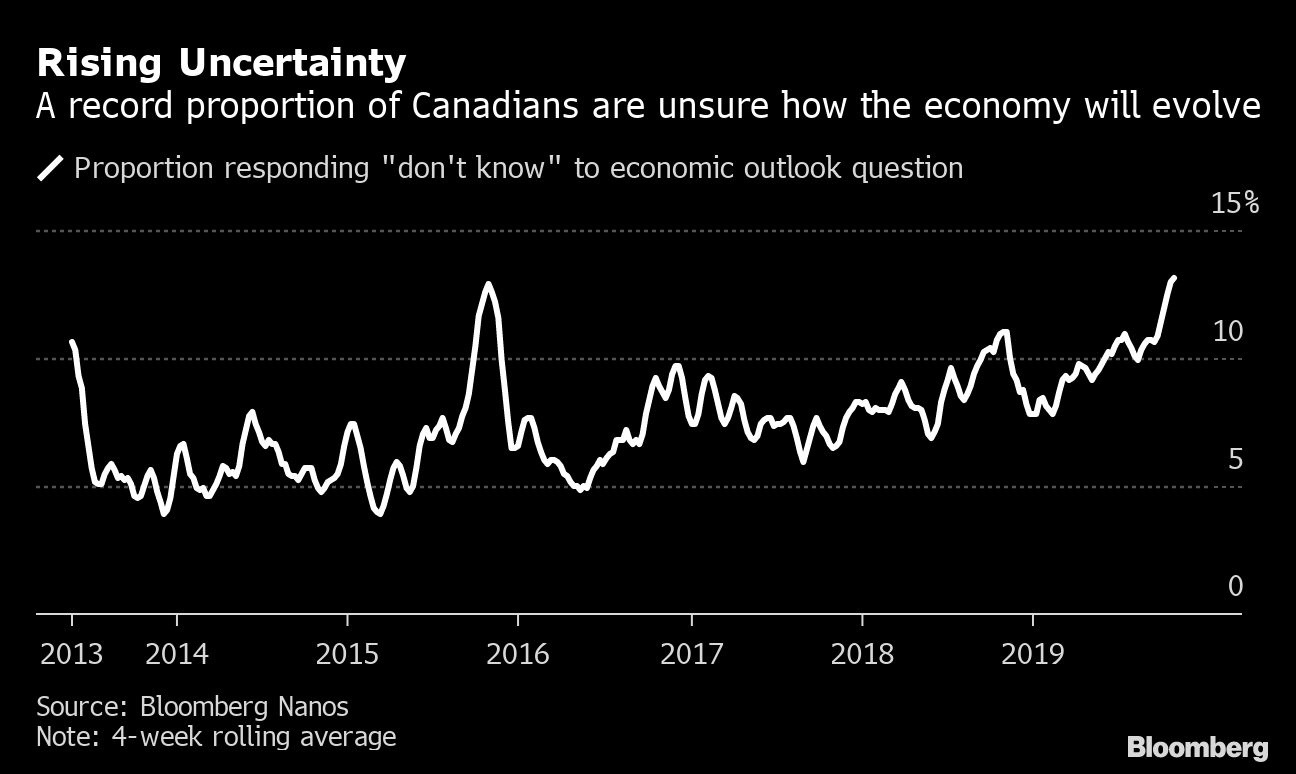