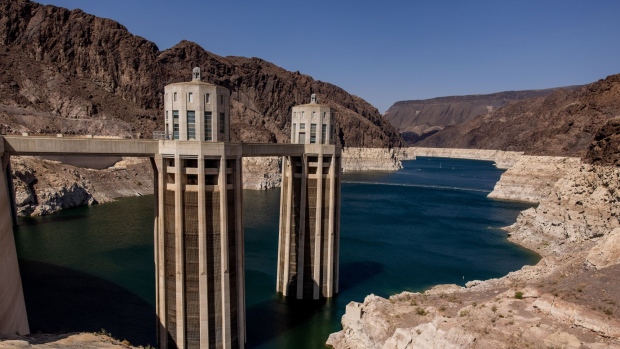 Intake towers during low water levels at the Hoover Dam on the Colorado River in Arizona, Nevada, U.S., on Thursday, Aug. 19, 2021. Federal officials ordered the first-ever water cuts on the Colorado River system that sustains 40 million people, the latest blow from a decades-long drought across the U.S. West that has shrunk reservoirs to historic lows, devastated farms and set the stage for deadly forest fires. Photographer: Roger Kisby/Bloomberg , Bloomberg

(Bloomberg) -- A group of US senators from western states said Friday they have secured $4 billion in drought-relief funding as part of the Democrats’ climate spending and tax bill slated for the Senate floor this weekend.

Funding for the assistance through the Interior Department’s Bureau of Reclamation was one of the demands made by Senator Kyrsten Sinema, an Arizona Democrat, who was a key holdout on the $433 billion spending package.

The funding deal was announced by Democratic Senators Mark Kelly, also of Arizona, Catherine Cortez Masto of Nevada and Michael Bennet of Colorado. All three are up for re-election in November in states where water politics loom large.

Senate Majority Leader Chuck Schumer’s office confirmed that the funding will be in the final bill.

The Southwest US is in the grips of its worst drought in 1,200 years. Some of the massive reservoirs along the Colorado River such as Lake Powell are in danger of no longer being able to produce power at their hydroelectric dams. The Bureau of Reclamation, the federal agency responsible for managing the dams on the Colorado, warns there’s a risk the power there could switch off as soon as next summer.

The funding would be used to buy private water rights and help municipalities with conservation projects to increase the level of water in the Colorado River system, according to a Senate aide.

“The Western United States is experiencing an unprecedented drought, and it is essential that we have the resources we need to support our states’ efforts to combat climate change, conserve water resources, and protect the Colorado River Basin,” Kelly, Cortez Masto and Bennet said in a statement Friday.