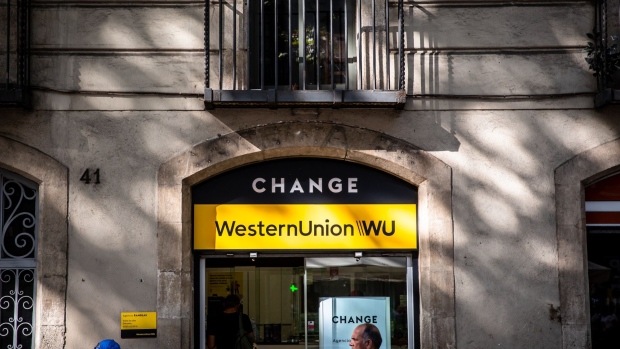 The firm will begin offering products such as debit or credit cards in the third quarter, Chief Financial Officer Raj Agrawal said in an interview Wednesday with Bloomberg Television. Western Union also is weighing the creation of a marketplace where consumers can shop, he said.

“We think it’s a natural stretch -- people trust us, they trust the Western Union brand,” Agrawal said in the interview. “There’s no reason why we can’t have a broader consumer relationship.”

Western Union has seen consumers flock to its website and app after the pandemic temporarily shuttered many of its retail locations around the world last year. The company said Tuesday it’s expecting revenue from its digital remittances business to jump to $1 billion this year, compared with just $600 million before the pandemic.

Still, the firm said expenses increased 2% to $977 million, higher than the $953 million average of analyst estimates compiled by Bloomberg. The firm’s shares fell 3% to $25.09 at 12:10 p.m. in New York, the worst performance in the 75-company S&P 500 Information Technology Index.

Western Union now expects earnings per share of $2.06 to $2.16 for the full year, an increase of six cents from an earlier forecast. The increase was partially driven by the sale of Western Union’s investment in Digital Currency Group, a company focused on Bitcoin and blockchain.

“That gained a fair amount of value and we thought it was the right time to monetize that,” Agrawal said in a separate interview.