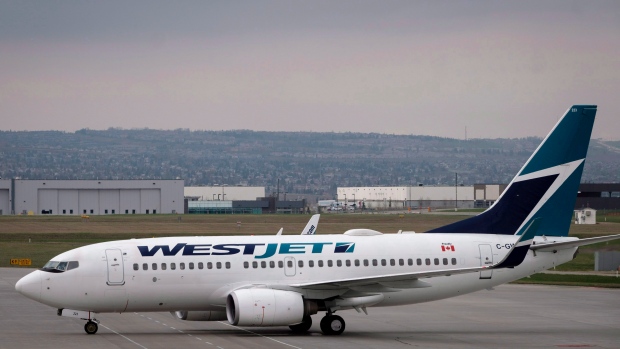 WestJet planes are seen at the Calgary Airport in Calgary, Alta., Thursday, May 10, 2018. , The Canadian Press

WestJet Airlines is cancelling service between Montreal and Quebec City and cutting back on flights across its network as it reduces capacity to meet consumer demand while also trying to reverse its first quarterly loss in 13 years.

The Calgary-based airline said flights between Quebec's two largest cities will end as of Oct. 28, more than a year after they started to great fanfare.

Canada's second-largest airline made a big splash in February of 2017 when it announced that it would take on Air Canada on its home turf in Quebec by pursuing one of the largest expansions in the airline's history after beefing up its service in French.

It claimed to be in a position to grow its reach in Canada's second-largest province by population after requiring that all flight attendants hired since 2014 be bilingual.

The airline, which has operated in Quebec since 2003, made its push by adding daily flights between Montreal and Quebec City, Halifax and Boston using 70-seat Bombardier Q-400s.

"We had anticipated stronger demand on Quebec City/Montreal route that did not materialize and as such, the decision was made to discontinue this route," she wrote in an email.

WestJet has said the introduction of low fares and competition to markets serviced primarily by Air Canada would prompt more people to fly.

"Ultimately, we have a responsibility to use our assets to provide a service that most guests are looking for and that gives a reasonable return on investment for our shareholders."

WestJet reported a rare loss of $20.8 million in the second quarter and adjusted some of its 2018 expectations to reflect the impact of higher fuel costs.

Passengers after Oct. 28 will be rebooked on flights connecting in Toronto, refunded or rebooked on other airlines.

The fate of the Quebec City to Calgary route for next summer hasn't been determined.

"We must be nimble and flexible to remain competitive in the market," Stewart added.

It will cut back on flights between Vancouver and Alberta cities Edmonton and Calgary, between Calgary and Denver, Edmonton and Phoenix along with Winnipeg and Palm Springs, Calif.

WestJet will reduce service between Halifax and St. John's and to Sydney. It will cancel service between the Nova Scotia capital and Deer Lake, NL, and winter flights between Edmonton and Ottawa that will resume next summer.

It is also cancelling all service to Mexico City, that will affect both Calgary and Vancouver. However, travel is still possible through its codeshare partner Aeromexico.