Canada should have one domestic travel policy: Westjet's director of government relations

WestJet is planning to restore service on a number of regional routes it suspended due to the impact of the pandemic.

In a release Wednesday, the air carrier announced it plans to resume flights to Charlottetown, Fredericton, Moncton, Sydney and Quebec City in late June, after initially suspending flights to those cities last November. WestJet will also resume service between St. John’s and Toronto on June 24.

Those route suspensions eliminated more than 100 weekly flights, and about 80 per cent of WestJet’s overall seat capacity in Atlantic Canada. 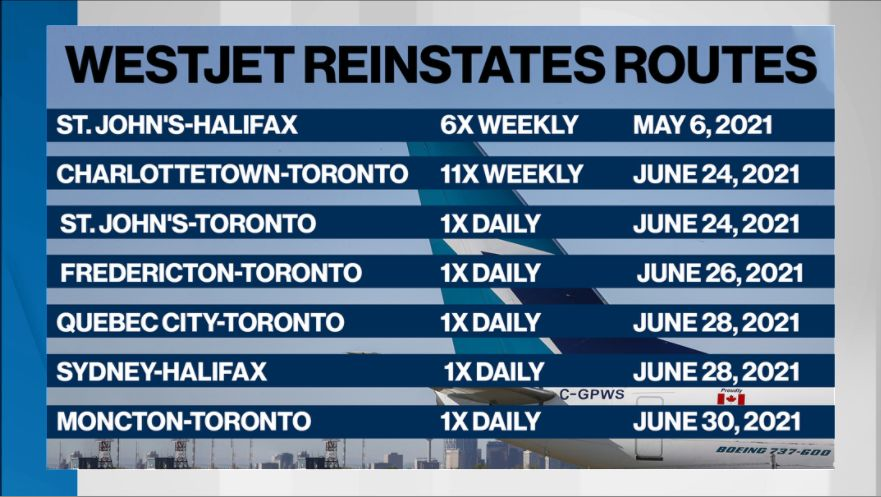 In the release, WestJet President and Chief Executive Officer Ed Sims said the company came to the decision to resume service on its own volition, and not due to outside pressure; he also called on policymakers to clearly outline a travel framework that would support Canada’s economic recovery.

"Our focus remains on the safe restart of air travel. We ask that federal and provincial governments work with us to provide clarity and certainty to Canadians, including travel policies that support economic recovery and restore jobs," Sims said.

WestJet has been battered by the pandemic, with travel restrictions and an overall reduction in air travel demand hammering operations. The company announced it was cutting the equivalent of 1,000 jobs in January, implemented a hiring freeze and reported a more than 80 per cent drop in planned capacity year-over-year through February and March.

While the industry has seen a precipitous drop in demand, Sims said he was optimistic a combination of widespread vaccinations and the easing of restrictions would help the industry recover.

"Alongside an accelerated and successful vaccine rollout, we are hopeful that there will be an easing of onerous travel restrictions currently in place," Sims said. "We look forward to working together to safely reconnect Canadians to the region in the coming months."

As a result of the carnage from the pandemic, the Canadian airline industry has been calling on the federal government for targeted aid for the sector. Negotiations between the feds and the sector are ongoing, but a number of key sticking points including the refund of customer deposits have emerged.

A spokesperson for Transport Minister Omar Alghabra was not immediately available for comment on WestJet’s resumption of regional service in Eastern Canada.