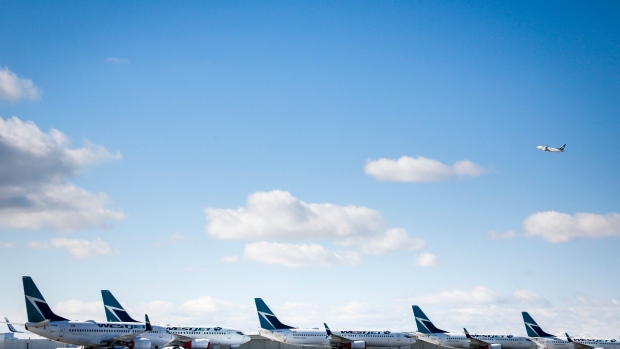 WestJet planes parked at the Calgary Airport after the company laid off nearly 7000 employees, in Calgary, Alta., Wednesday, March 25, 2020, amid a worldwide COVID-19 flu pandemic. , THE CANADIAN PRESS/Jeff McIntosh

WestJet Airlines Ltd. plans to lay off 1,700 pilots -- three-quarters of the cockpit roster -- as the company struggles with fallout from the COVID-19 pandemic.

About 700 pilots are slated to receive layoff notices effective May 1, with 1,000 more kicking in on June 1, depending on employee seniority, according to the Air Line Pilots Association.

The layoffs come amid an ongoing collapse of global travel triggered by border shutdowns and tanking demand, with WestJet parking nearly three-quarters of its fleet and, like Air Canada, cancelling the vast majority of its flights through April and May.

"Issuing layoffs, in response to this crisis, has always been a last resort for WestJet; however, the impact of COVID-19 on the aviation industry is colossal, and WestJet is making difficult but necessary decisions to right-size our airline to weather the crisis," a WestJet spokesperson wrote in an email.

One week ago, WestJet announced it would bring back nearly 6,400 laid-off workers to its payroll using Ottawa's emergency wage subsidy program.

The earlier layoffs did not affect pilots, who had signed a memorandum of understanding to stay on board through April. The 1,700 laid-off pilots will be placed on inactive status and be able to access the federal wage subsidy, the Calgary-based company said.

The furloughs will apply at the carrier's mainline service as well as WestJet Encore and its budget subsidiary Swoop.

The Air Line Pilots Association said in an email Thursday that "discussions are ongoing to mitigate the June layoffs."

Pilots had already made concessions to forgo about 50 per cent of total compensation through April, said Capt. Dave Colquhoun, who chairs the union's WestJet pilots group.

Over the past few weeks, he has been taking part in talks with Ottawa around a possible aid package for airlines.

"We're looking for the government to find that delicate balance between supporting labour and also understanding the needs of business," Colquhoun said in a telephone interview Thursday.

He cautioned against attaching constrictive strings to a financial relief plan, warning that onerous obligations could harm workers.

"On the surface it seems nice to guarantee a certain number of jobs," Colquhoun said. "We want to make sure that the labour force is kept intact for that recovery. In order to do that, the business has to survive.

"We anticipate that the government's probably going to look at options where they buy equity positions in companies," he added, but offered as a model the U.S. approach revolving around US$61 billion in federal grants and loans.

At least a dozen countries have thrown their carriers a lifeline in the form of loans, tax relief or direct financial support.

Earlier this week, the International Air Transport Association said passenger revenues will fall by US$314 billion this year -- a 55 per cent drop from 2019 -- due to "severe domestic restrictions" lasting three months, with some international travel controls extending longer.

"The world is heading for recession," the trade group said, positing that reduced economic activity in the second quarter alone would prompt an eight per cent fall in passenger demand in the third quarter.

Alexandre de Juniac, the association's director general, called for "urgent relief" as the "industry's outlook grows darker by the day."