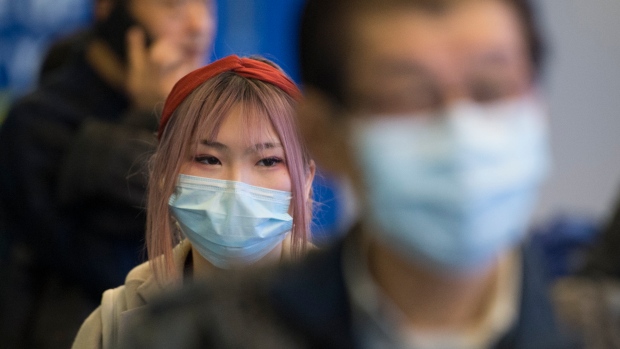 Passengers wear masks as they arrive at the international arrivals area at the Vancouver International Airport in Richmond, B.C., January 23, 2020. The Canadian Press/Jonathan Hayward

WestJet passengers in Vancouver may soon be taking COVID-19 tests before takeoff.

WestJet Airlines Ltd. and Vancouver International Airport announced on Friday plans for a pilot project to test passengers for the coronavirus on some departing flights, the latest move in a broader push by carriers to show they are serious about combatting viral spread as they try to coax Canadians back to the skies.

The pilot, slated for this fall, will share data with government and health authorities and incorporate academics “to marry our expertise in passenger movements to science,” WestJet CEO Ed Sims said in a blog post co-authored by Vancouver Airport Authority CEO Tamara Vrooman.

“It supports our efforts to uphold top safety standards, while instilling confidence for those who need to travel. It's also about building collective knowledge and literacy, which will help inform longer-term solutions around communicable diseases.”

Testing will be voluntarily, Vrooman said in an interview, but the type of test has yet to be determined.

The announcement comes alongside a strict new policy at the airline to ensure passengers wear masks on board, with potential consequences for non-compliers that include a yearlong travel ban.

WestJet customers must also provide their contact information during check-in to help provincial and federal health agencies with contact tracing if an infected passenger is on the same flight.

The policy, applicable to all WestJet flights as well its budget subsidiary Swoop starting Sept. 1, builds on the mandatory on-board mask rule imposed by Transport Minister Marc Garneau in April to help prevent the spread of COVID-19.

“The decision they announced today - to collect names and contact information for each of their passengers at check-in and share it with public health if a COVID-19 case is identified on a flight - is something we discussed at that meeting and will help us immensely,” reads Friday's joint statement from Henry and Dix.

The new measure aims to better enforce existing safety protocols, and comes as the airline and other Canadian carriers are pushing for eased travel restrictions.

The National Airlines Council - a trade group that represents Air Canada, WestJet, Air Transat and Jazz Aviation - called last week for a more targeted approach to quarantines. It asked the federal government to end the blanket ban on foreign travellers - reciprocal bans are not in place for Canadian travellers to many countries - and the two-week self-isolation required of all Canadians returning from abroad, regardless of country of origin.

The council and Air Canada CEO Calin Rovinescu have also demanded a more consistent approach to domestic restrictions, as the four Atlantic provinces continue to enforce a travel “bubble” that requires a two-week quarantine for those arriving from outside the region.

To help persuade Ottawa to take a more “rational” approach, Rovinescu has gone the same route as WestJet and approved a voluntary COVID-19 test trial for travellers who land at Pearson airport in Toronto, according to a research note by a Raymond James analyst.

Air Canada is working with the Greater Toronto Airports Authority to launch the tests - what kind is not yet clear - in September, the note says. The idea is to “convince the government to take more of a science-based approach with the 14-day quarantine requirement waived or reduced for those with successful (negative) tests,” analyst Savanthi Syth said this week in a note, which was based on a presentation by Air Canada chief financial officer Michael Stewart Rousseau.

Air Canada declined to comment on any testing measures.

Like WestJet, Air Canada shares contact information with health authorities when requested, said spokesman Peter Fitzpatrick. The airline has previously sanctioned customers for failing to comply with health and safety rules in “a small number of incidents.”

Between Aug. 9 and Aug. 24, 31 domestic and 43 international flights with confirmed or suspected cases of COVID-19 arrived at or departed from Canadian airports, according to figures from the Public Health Agency of Canada.

The pandemic has been devastating for the airline industry, with little sign of a quick rebound in the near future.

Canadian airline revenues in 2020 will fall by $14.6 billion or 43 per cent from last year, according to estimates from the International Air Transport Association.

Passenger revenues at Air Canada dropped 95 per cent year over year in its second quarter, prompting 20,000 layoffs as the airline burned through $19 million per day. WestJet said it has laid off about 4,000 employees since March.

“The most profitable period of an airline is the summer. We're right into it now. They will be bleeding hard during that period. The other months that are not as profitable will probably be even worse than you've seen in the past.”

He said WestJet's new mask policy marks an attempt to show it is serious about the health of passengers, who are almost unanimously in favour of such precautions on board.

Refusal to wear a mask by customers over the age of two will be met with a three-step process, WestJet said. Flight attendants will first ask them to put on a mask and then give a warning that face coverings are required.

If passengers continue to refuse, cabin crew will notify them that they are being placed on a no-fly list for travel on any WestJet aircraft for 12 months.

“Masks are mandated by our regulator and the vast majority of our guests are happy to keep themselves and each other safe by complying. This enhanced policy provides clarity on how we will enforce the regulation for those who don't,” chief executive Ed Sims said in a statement.

“Travellers must understand if they choose to not wear a mask, they are choosing not to fly our airlines.”