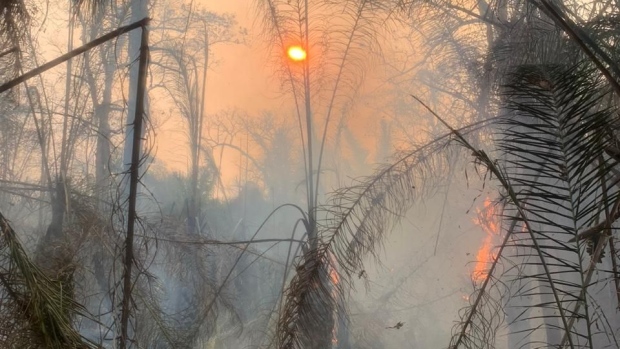 Some of the world's last remaining blue macaws lived at a sanctuary in Brazil's Pantanal wetlands until fire ripped through the area in August 2020 , via Bloomberg

(Bloomberg) -- About 2,500 kilometers south of the Amazon rain-forest, other one-of-a-kind ecosystems are falling victim to fire and ax.

South America’s Pantanal wetlands -- reaching into Brazil, Bolivia and Paraguay -- are burning at a record pace this year. In Brazil, a sanctuary that was home to some of the world’s last surviving blue macaws said it was devastated by fire. And in Argentina, thousands of acres of wetlands around the Parana River have been ablaze for months, with apocalyptic images on social media showing the port city of Rosario encircled in red flames in July.

Like in the Amazon, commercial farmers are largely to blame for the destruction, clearing vegetation during the annual dry season to graze cattle and grow crops for export. This year, they got a head-start in Argentina and Brazil as the continent has been hit by drought.

In July, the number of fires burning in the Pantanal, which spans about 210,000 square kilometers (81,100 square miles), reached the highest for the month since the data started being collected in 1998, according to Brazil’s Spacial Research Institute, known as Inpe. The alarming trend is continuring in August, with September historicaly the worst month for blazes. Across South America, fires are at their highest in a decade.

“These fires are the equivalent of what was happening in the Amazon last year,” Argentina Deputy Environment Minister Sergio Federovisky told Infobae on Aug. 5. “They’re trying to change an ecosystem, freeing up natural land to encourage commercial activity.”

While much of the world’s ire over deforestation has been focused on the Amazon rain-forest, scientists and environmentalists say the destruction of the Pantanal and other wetlands like it threaten to further worsen droughts and push entire species to the brink of extinction. Five-thousand of the world’s remaining 6,500 blue macaws lived in the Pantanal, but the sanctuary that hosts most of them was overrun by flames this month, according to Arara Azul, the institute seeking to protect the birds.

The Pantanal is as large as Belgium, Switzerland, Portugal and the Netherlands combined and is home to more than 4,500 species of plants and animals. The wetlands have been dubbed a Biosphere Reserve and Natural Heritage of Humanity site by Unesco.

Climate change caused by the burning of the Amazon has already reduced humidity currents in the air known as “flying rivers,” said Ivan Bergier, a researcher at the Pantanal division of Brazilian agricultural data company Embrapa. That’s robbing the wetlands of seasonal torrential rains that cause annual flooding in the Pantanal. This year, the rise in water levels was the lowest in three decades after extreme heat and low rainfall starting late last year.

Below-average precipitation will continue in coming months, further exacerbating a devastating drought in the Paraguay River and possibly reducing water levels there to the lowest in 47 years, Embrapa forecasts.

Dry periods overall are getting longer, according to a study by institutions including Embrapa and the University of Kentucky. The number of rainy days in the Pantanal during the summer -- which runs from December to March in the Southern hemisphere -- fell by 25% to 32 between 1926 and 2016, Bergier said. That coincides with a 70% jump in acreage dedicated to livestock and crops in the biome in the 20 years through 2018, according to Mapbiomas.

“The shortened rainy season combined with higher temperatures have turned the green vegetation into a dried biomass ready to be burned,” Bergier said.