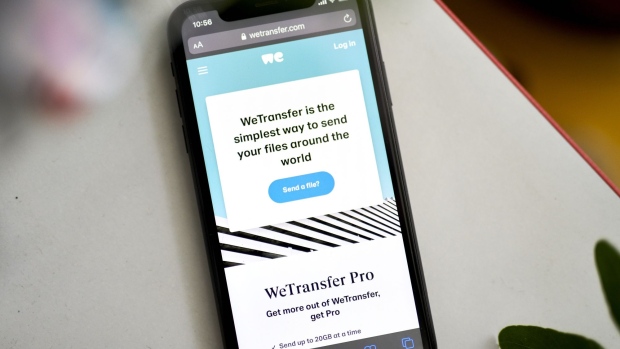 The WeTransfer website on a smartphone arranged in the Brooklyn borough of New York, U.S., on Wednesday, June 2, 2021. File-sharing platform WeTransfer plans to seek a valuation of about 1 billion euros ($1.2 billion) from a proposed initial public offering later this year, people familiar with the matter said. , Bloomberg

WeTransfer and its backers seek as much as 252 million euros ($286 million) in an Amsterdam initial public offering, in a key test of investor appetite as the rout in tech stocks deepens.

The file-sharing platform is looking to raise 125 million euros in the listing, less than the 160 million euros initially targeted, amid a bad start to the year for the tech sector. The deal values WeTransfer at as much as 716 million euros.

Tech shares have been caught up in a rotation out of frothy growth assets as the prospect of interest rate hikes pushes bond yields higher. The Stoxx 600 Index’s technology subgroup is the benchmark’s worst performer this year.

Shares are marketed at 17.50 euros to 20.50 euros each through Jan. 27, with the new stock set to start trading the next day. Holders Highland Europe Technology and HPE Institutional Fund II are selling part of their stakes in the IPO.

The company’s owner WeRock NV will be renamed The Creative Productivity Group immediately prior to admission. Underwriters have the option to sell additional shares in the offering, which could boost the deal size to as much as 290 million euros.