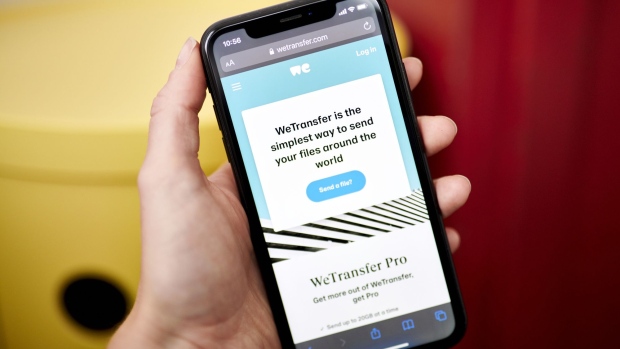 The WeTransfer website on a smartphone arranged in the Brooklyn borough of New York, U.S., on Wednesday, June 2, 2021. File-sharing platform WeTransfer plans to seek a valuation of about 1 billion euros ($1.2 billion) from a proposed initial public offering later this year, people familiar with the matter said. Photographer: Gabby Jones/Bloomberg , Bloomberg

(Bloomberg) -- WeTransfer decided not to go ahead with its initial public offering in Amsterdam as a selloff in technology stocks hit investor appetite.

The offering is being pulled due to volatile market conditions, the file-sharing platform said in a statement Thursday. Last week, the company knocked 20% off its original proceeds target, seeking to raise 125 million euros ($140 million). The IPO valued the company at as much as 716 million euros.

Gavin Launder, a fund manager at Legal & General Investment Management, said market conditions were partly behind his decision not to participate in the IPO. He also cited worries that the company “didn’t have any real barriers to entry and concerns that Google and Amazon.com Inc., the owners of the cloud infrastructure, could move in.”

Tech shares have been caught up in a rotation out of frothy growth assets as the prospect of interest-rate hikes pushes bond yields higher. The Stoxx Europe 600 Index’s technology subgroup is the benchmark’s worst performer this year.

WeTransfer had already tempered its valuation expectations, missing out on the unicorn tag reserved for startups worth more than $1 billion. Shareholders Highland Europe Technology and HPE Institutional Fund II had planned to sell part of their stakes in the IPO.

(Adds investor comments in the third and fifth paragraphs.)