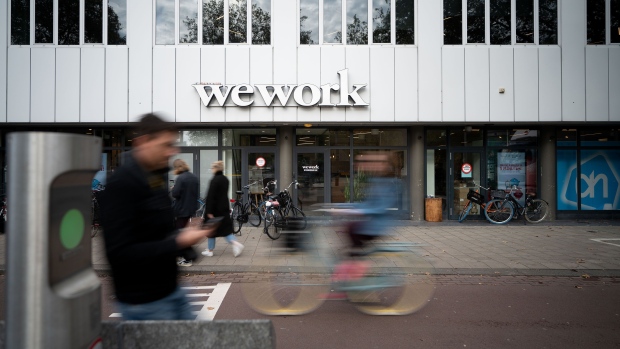 (Bloomberg) -- JPMorgan Chase & Co. is leading discussions to put together a rescue package for cash-strapped WeWork that may come together as soon as next week, the Financial Times reported.

The U.S. investment bank may contribute a large sum to any bailout, giving WeWork a much-needed infusion of cash after the once high-flying startup’s failed attempt at an initial public offering, the newspaper cited unidentified people as saying. The co-working company will need fresh capital by the end of November, the FT reported.

WeWork formally withdrew the prospectus for an IPO this month, capping a botched fundraising effort that cost its top executive his job. The defeat places urgency on WeWork to find new sources of capital to keep its business running. The New York-based company had faced a deadline for completing a successful stock listing by the end of the year in order to secure a $6 billion loan, in addition to at least $3 billion in capital that WeWork would have raised in an IPO.

With WeWork set to run out of cash soon at the current pace of spending, the two co-chief executive officers who replaced co-founder Adam Neumann are weighing possible staff cuts and divestitures.

To contact the reporter on this story: Edwin Chan in Hong Kong at echan273@bloomberg.net

To contact the editor responsible for this story: Peter Elstrom at pelstrom@bloomberg.net