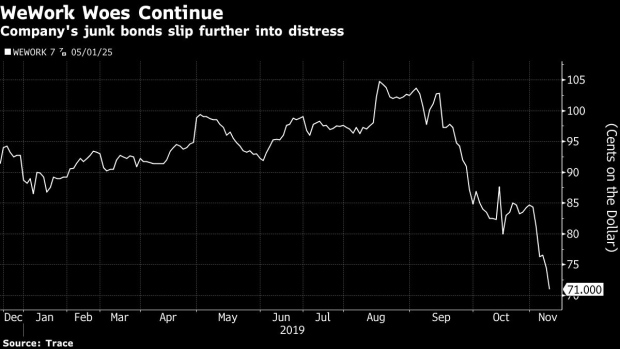 (Bloomberg) -- WeWork’s bonds are falling deeper into distress as the office-sharing company confronted another string of negative headlines in the past week -- from an SEC inquiry into its failed IPO to a $1.25 billion third-quarter loss.

The company’s $669 million of notes due in 2025 dropped more than 3 cents on the dollar to about 71 cents on Monday, according to the bond-price reporting system Trace. That pushed the yield on the debt to more than 16%.

The company told employees Monday that it will begin slashing jobs “in earnest” this week as it recovers from a scrapped initial public offering in September and saw its valuation plunge to about $8 billion from $47 billion. People familiar with the matter told Bloomberg earlier that the layoffs could total about 2,000.

WeWork has had a rough few days. It told bondholders last week that its net loss more than doubled in the third quarter as it prepared for the IPO it would later abandon. The U.S. Securities and Exchange Commission is also reviewing WeWork’s business and its disclosures to investors amid a number of news articles highlighting potential conflicts of interest and the company’s aggressive fund-raising, Bloomberg News also reported last week.

After reports that T-Mobile Chief Executive Officer John Legere was in discussions to lead the company, a person familiar with the matter said it wasn’t true. WeWork ousted its former chief executive Adam Neumann in September.

To contact the reporter on this story: Claire Boston in New York at cboston6@bloomberg.net