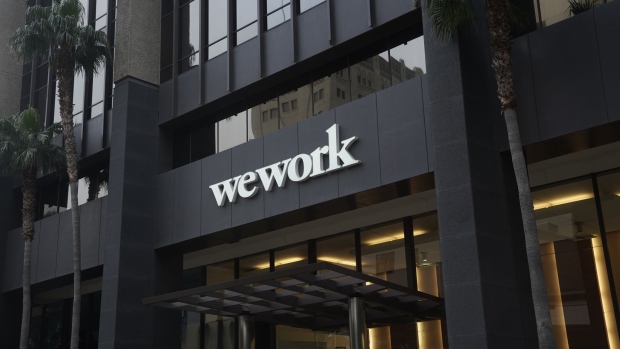 Signage is displayed on a WeWork co-working space, operated by parent company We Co., in downtown San Diego, California, U.S., on Thursday, May 7, 2020. Emptied out malls and hotels across the U.S. have triggered an unprecedented surge in requests for payment relief on commercial mortgage-backed securities, an early sign of a pandemic-induced real estate crisis. Photographer: Bing Guan/Bloomberg , Bloomberg

Fitch Ratings downgraded troubled co-working company WeWork and warned that the once high-flying startup could default on its obligations.

On Thursday, the agency said it lowered the company’s long-term issuer default rating to CCC from CCC+. That indicates “substantial credit risk” and suggests “default is a real possibility,” according to Fitch’s rating scale.

Fitch cited the effects of the COVID-19 pandemic on WeWork’s already struggling business model. The startup tried and failed to go public late last year. The spread of the coronavirus worsened WeWork’s predicament as people opted to work from home, rather than in the communal offices the company rents out.

WeWork leadership has maintained that as businesses look for more flexible options for office space, they will increasingly turn to WeWork’s buildings. The pandemic could upend the traditional office market, sending more people looking for independent work space, an outcome that could eventually be good news for WeWork.

But if a fresh wave of COVID-19 cases materializes, or demand for office space declines structurally, Fitch estimated that WeWork would burn through about US$1.5 billion of cash in both 2021 and 2022. In that scenario, WeWork would have to seek “additional liquidity, the availability of which is highly uncertain,” the agency said.

While WeWork’s largest investor, SoftBank Group Corp. has provided substantial support to the company, “it is unclear that further funding would be available in a distressed scenario,” Fitch wrote. WeWork declined to comment.

WeWork’s bonds maturing in 2025 last traded at about 63 cents on the dollar, according to Trace pricing data.