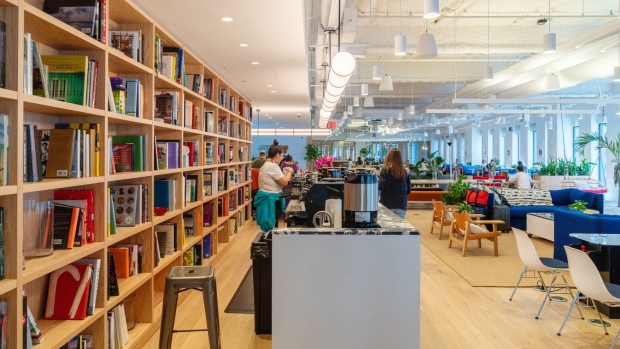 A member places an order at the coffee bar inside the WeWork Cos Inc. 85 Broad Street offices in the Manhattan borough of New York, U.S., on Wednesday, May 22, 2019. , Bloomberg

(Bloomberg) -- Real estate lenders shouldn’t have a blanket policy against providing loans to landlords that count co-working companies such as WeWork as tenants, an executive for the New York company said Thursday.

“It’s important for lenders to look at the fundamentals of each opportunity and not paint everything with a broad brush, because there’s a lot of noise,” said Candice King, senior director of capital markets for WeWork’s real estate investment platform, known as ARK. She made the comments at a Women in Real Estate conference hosted by the NYU School of Professional Studies in New York.

She warned against writing off “co-working as a fad or a trend,” adding that she thought WeWork had successfully disrupted the office sector.

“WeWork has proven there needed to be a change on how work and how office leases were going to function to serve a population that wanted more flexibility,” King said.

ARK’s equity partners are “very committed,” she said. These include Canada’s Ivanhoe Cambridge, which has committed $1 billion toward ARK’s $2.9 billion total for buying stakes in buildings where WeWork is a tenant.

When asked about the biggest risk factor to the economy, Neha Santiago from Goldman Sachs Group Inc.’s real estate investment arm and a fellow panelist, replied “WeWork,” prompting laughter from the audience.

To contact the editors responsible for this story: Alan Goldstein at agoldstein5@bloomberg.net, Steven Crabill, Christine Maurus