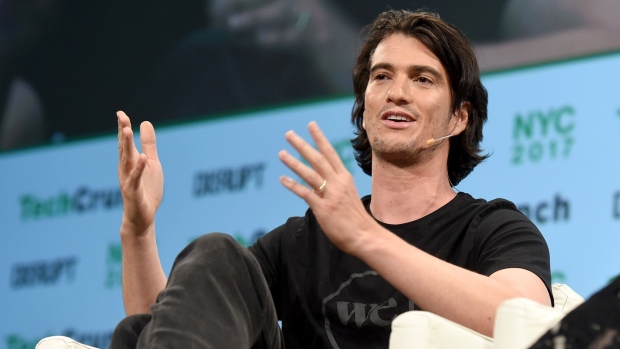 (Bloomberg) -- Adam Neumann was poised to become one of the world’s richest entrepreneurs.

This year, more than a decade after he launched WeWork, the space-sharing real estate company planned to go public with some bankers privately touting a valuation as high as $65 billion. That would have pegged Neumann’s current 22% stake in the unprofitable business at $14 billion, at least on paper, catapulting him into the ranks of the world’s 150 richest people.

But Neumann, 40, may have to make do with a more modest fortune after a rough run-up to WeWork parent We Co.’s initial public offering that has left creditors questioning where the firm will turn next for financing as it continues to burn cash and its bonds tumble. The IPO prospects soured further after the disclosure of unorthodox financial dealings between Neumann and the company, including personal loans, real estate leases and stock sales.

Regulatory filings show that early investor Fidelity Investments cut its valuation on We Co. to $18.3 billion in March, well before Wall Street began to scale back its own expectations for an IPO. The predicted valuation is now as low as $15 billion, according to people with knowledge of the matter. That would leave Neumann with a stake of about $3 billion -- not enough for a listing in the 500-member Bloomberg Billionaires Index.

Still, that’s nothing to sneeze at, particularly for someone who spent part of his childhood on a kibbutz. Neumann moved to New York from Israel in 2001 to have fun and make a lot of money, as he put it in a commencement address at Baruch College, his alma mater. Then he met Rebekah, his future wife, who’s listed in a prospectus as a co-founder, chief brand and impact officer, and a “strategic thought partner.”

Neumann and co-founder Miguel McKelvey started WeWork after sharing an office space in Brooklyn. McKelvey, like Neumann, spent part of his childhood in a communal environment: a collective in Oregon.

“We are making a capitalist kibbutz,” Neumann said in a 2017 interview with Israeli newspaper Haaretz.

He moved to New York after five years in the Israeli Navy and, in 2002, enrolled at Baruch College, where he studied entrepreneurship and marketing. After a couple of failed product launches, including a women’s shoe line and baby pants with knee pads, he dropped out to focus on entrepreneurial ventures full time.

Rebekah Neumann has studied under the Dalai Lama and “Mother Nature herself,” according to a profile on the website of WeGrow, a private elementary school network she founded. WeGrow tuition costs as much as $48,000 for the 2020-21 school year, with a curriculum that includes yoga and meat-free community lunches.

Since its founding, We Co. has raised more than $12 billion and opened locations in more than 100 cities. The company -- formerly known as WeWork Co. -- bought its current name from Neumann and McKelvey for $5.9 million, one of several arrangements that has drawn scrutiny over the years. Neumann maintains voting control through a three-class share structure and also has been criticized for borrowing the firm’s money, leasing properties he owns back to the company and selling chunks of equity ahead of the planned IPO.

The firm rents space in four buildings owned by Neumann, according to the prospectus. It signed a lease on three of them the day he obtained his stake, and committed to being a tenant in them within the next year.

Such disclosures -- and the billions of dollars of losses the firm has racked up in recent years -- increased unease among investors already frustrated by the lackluster market debuts of Silicon Valley darlings such as Uber Technologies Inc.

WeWork is considering major changes to governance to assuage such concerns, according to people with knowledge of the situation. The company already has taken some steps, such as adding a woman to its board and having Neumann return the $5.9 million of partnership interests initially granted to him as compensation for trademarks used in the rebranding. The company and its biggest backer, SoftBank, are also discussing whether to delay the IPO, people with knowledge of the talks have said.

Neumann probably isn’t hurting for cash, even with a delay. He has already pledged some of his stock to secure a line of credit of as much as $500 million from affiliates of UBS Group AG, JPMorgan Chase & Co. and Credit Suisse Group AG, according to last month’s prospectus. About $380 million of that total was outstanding at the end of July.

--With assistance from Ellen Huet and Gillian Tan.

To contact the reporters on this story: Sophie Alexander in San Francisco at salexander82@bloomberg.net;Tom Metcalf in London at tmetcalf7@bloomberg.net