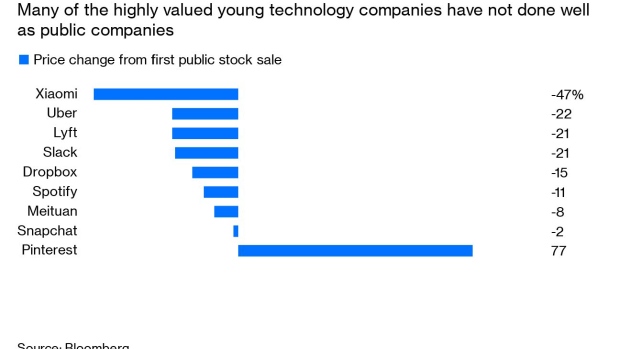 (Bloomberg Opinion) -- I get paid to write words for a living, and I am nearly at a loss for words about WeWork Cos.

The company on Wednesday released the financial paperwork for its planned initial public offering of stock. The company is in many respects what people thought it was, although I don’t think we knew the half of it. WeWork is an office subleasing company on steroids, with a complicated corporate structure topped by a single person, Chief Executive Officer Adam Neumann, who has unusual measures of control or influence over the company.

Yes, WeWork is growing swiftly and posting heavy losses. That was not a surprise. What surprised me, at least, is the numbers behind those losses. Last year, WeWork’s filing shows, it recorded $1.7 billion in revenue from rent and service fees charged to people and companies subleasing office space from the company. That was double the revenue from tenants in 2017, and the revenue figure is on pace to increase at about the same rate this year.

That’s the kind of growth that gets investors justifiably excited, and they may be willing to overlook eye-watering losses as WeWork grabs for bigger chunks of the huge but fragmented commercial leasing market. But look at how WeWork is generating its losses.

Last year in buildings that WeWork had up and running, the company recorded $1.5 billion in lease payments to landlords, plus costs for employees, utilities, real estate taxes, office cleaning, repairs and other expenses. That means WeWork’s revenue from operational office locations is scarcely higher than expenses for those locations — not including anything the company is paying for fixing up new locations that aren’t open yet, or costs for employees not working on operating office buildings.(6)

It’s standard practice for WeWork and other office leasing companies to give tenants breaks on rent for a while, and no doubt that is driving up WeWork’s costs for its workspace locations related to the revenue it’s bringing in from the buildings. But WeWork's numbers belie the notion that the company is simply incurring losses for funding its expansion.

The company right now is eking out a slim base profit simply from the revenue it takes in minus the bare minimum costs to run its buildings. The revenue for each WeWork tenant also is declining. WeWork attributes the decline to its expansion into countries with lower standard prices for tenants and to discounts it dangles to persuade tenants to sign longer-term subleases.

The financial disclosures make it clear that WeWork — which, it should be said, is a commerce office leasing company and not truly a tech company — shares the hallmarks of Uber Technologies Inc. and other high-profile young technology startups.

At this point in WeWork's life, it’s tough to assess whether the company is economically viable in the long term. Its growth is overwhelming, but it’s not clear that it got there in a sustainable way. This company is a leap of faith, as are many of the young tech-ish companies hitting the stock market. Many of them have done poorly as public market stocks.

The WeWork leap of faith rests, in part, on the ability of the company’s management to take advantage of the shake-up it started in the commercial office leasing business. And there are red flags about how WeWork is structured and operated. I am not joking when I say that the typically rote IPO filing section about transactions involving a company’s CEO or other insiders is astonishing for WeWork.

A glimpse at those disclosures: Rebekah Neumann — the CEO’s wife and a company co-founder — is one of two or three people who would pick a successor if Adam Neumann dies or is incapacitated.(1) It has already been reported that Neumann has personally owned at least parts of a handful of office buildings that WeWork leases(2)and that he has taken out hundreds of millions of dollars in loans secured, in part, by his holdings of WeWork stock. And as previously reported, WeWork recently created a complex partnership structure that pays out profits to Neumann and others in a setup that minimizes their individual tax payments.(4)

At least two members of Adam Neumann’s family, other than his wife, have done work for the company, including promotional work for a WeWork awards events for which the company’s biggest outside shareholder has paid tens of millions of dollars to fund. Neumann controls the company and has more tied up in its future success that anyone on Earth, but the board this year gave him options on tens of millions of shares of stock that were linked in part to WeWork’s stock market value increasing as high as $90 billion, then recently canceled most of those options and gave him an instrument tied to WeWork’s future profits.(3)

In short, everything about WeWork is utterly odd. It is a real estate company valued like a tech company. It is a young company with questionable economics that has committed to paying tens of billions of dollars in future years for office building leases. This is a company whose intricate relationships with its chief executive requires 10 pages of disclosures. And this may be the first time I’ve seen an IPO filing with a section titled “Expected Resilience in a Downturn.”(5)

WeWork may be the most magical creature in the last decade of richly valued “unicorn” startups that are attempting to bust up established industries. Its ambition is ambitious even by unicorn standards. So are its growth, losses, potential conflicts of interest and financial gymnastics. Succeed or fail, at least WeWork is not boring.

(1) WeWork has ditched the much-maligned "community adjusted Ebitda" metric, which attempted to isolate the revenue and costs from only the operational WeWork locations. The metric was in the first few draftsof WeWork's IPO paperwork to the SEC, and it's still there in spirit if not in name. WeWork now prefers a profit metric it calls "Contribution margin excludingnon-cashGAAP straight-line lease cost."

(2) Under some circumstances, she can pick the other two people on this three-person CEO selection committee.

(3) WeWork recently created an investment vehicle, called ARK, that will buy stakes in buildings in which WeWork is a major tenant. The IPO filing said ARK would manage Adam Neumann's interest in 10 commercial properties he owns, including four that are leased by WeWork.

(4) Bonus disclosures: If Adam Neumann does not donate at least $1 billion in cash, property or stock to charity in the next 10 years, his voting rights get cut in half. The company has periodically lent money to Adam Neumann or companies he controls, and one of his affiliated companies recently sold WeWork-related trademarks to the company. The IPO filing says that "Adam is a unique leader who has proven he can simultaneously wear the hats of visionary, operator and innovator, while thriving as a community and culture creator."

(5) Neumann swapped out a portion of those options the company valued at more than $360 million in a complicated transaction with the company that gave him a financial instrument tied to future WeWork profits.

(6) WeWork’s ability to withstand a recession or a real estate sector collapse is an open question, so I suppose credit the company for tackling this risk head-on.