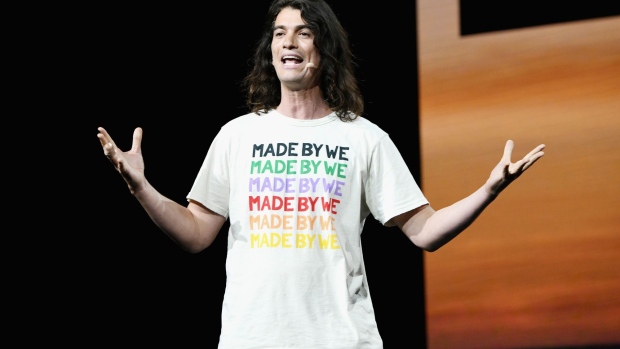 WeWork and its primary backer, SoftBank Group Corp., paid Adam Neumann only a portion of the US$185 million fee that was part of his controversial exit package as chief executive officer, a person familiar with the transaction said.

The fee was tied to a noncompete agreement for Neumann, said the person, who asked not to be identified because the details are private. A portion of the payment depended on the completion of a deal to acquire WeWork stock from Neumann and other shareholders, the person said. SoftBank backed out of that stock transaction, a move that is the subject of a lawsuit involving Neumann.

The status of Neumann’s exit package came into focus on Monday when Marcelo Claure, a SoftBank executive and WeWork executive chairman, was asked about it at the Wall Street Journal’s technology conference. He said the arrangement was no longer in effect and declined to elaborate, citing the legal dispute. It’s unclear how much Neumann was paid.

Representatives for SoftBank and WeWork declined to comment. A spokesman for Neumann didn’t immediately respond to a request for comment.

Neumann's promised US$185 million fee was part of a larger deal on his way out of WeWork that included the chance to sell US$1 billion in stock and a US$500 million loan. The package, which was part of SoftBank's bailout of the co-working startup last fall, felt like salt in the wound for many WeWork employees, who had just watched their company's initial public offering plans crumble. Weeks after Neumann walked away, thousands of WeWork jobs were eliminated.

Since then, though, Neumann's generous compensation hasn't all come through. Notably, SoftBank reneged at the last minute from the tender offer in which Neumann would have been able to sell his shares. That prompted a lawsuit from both WeWork and Neumann, claiming SoftBank broke its agreement to buy US$3 billion in shares from Neumann, investors and employees. That lawsuit is still ongoing.