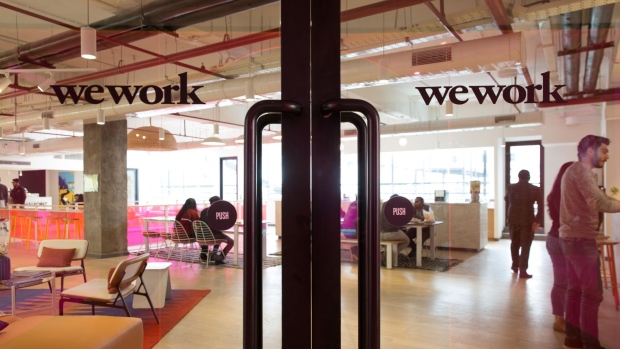 Signage is displayed on glass doors at a WeWork co-working space in Gurugram, India. , Bloomberg

WeWork needs new financing before the end of November to avoid running out of money, two people familiar with the matter said.

The office-sharing company is trying to reach terms on a financing package to ease the cash crunch, including one that’s contingent on an equity injection, most likely by SoftBank Group Corp., one of the people said, asking not to be identified discussing private talks. One of the people said a deal is expected in the next two to three weeks.

Analysts had previously estimated that the company would run out of money by the middle of next year. WeWork parent We Co. had been counting on an initial public offering -- and a US$6 billion loan contingent on a successful IPO -- to meet its cash needs, but that plan unraveled amid questions about its future profitability. The company’s new co-chief executive officers have been moving to slash costs and spin off businesses in an effort to slow its cash bleed.

The company’s bond prices climbed from record lows amid reports of the financing talks. Its senior unsecured notes due 2025 were up 1.125 cents on the dollar to around 83.5 on Friday at 9:40 a.m. in New York, after dropping to as low as 81.25 cents on Thursday, according to Trace bond trading data.

WeWork’s bonds, which traded above par less than a month ago, have plunged into distressed levels during the past month, dropping more than 20 cents on the dollar amid mounting concerns about the company’s cash situation. Fitch Ratings and S&P Global Ratings have cut WeWork’s credit grade further into junk on liquidity issues.

A WeWork representative didn’t immediately respond to a request for comment.