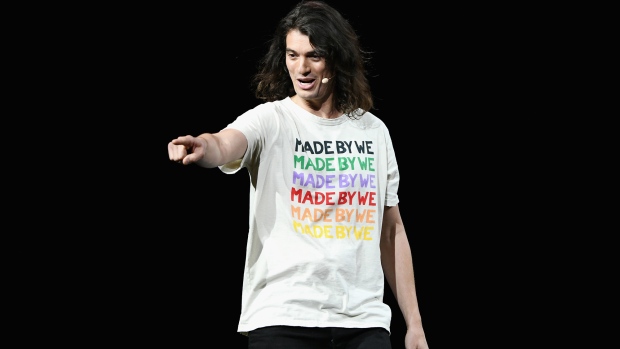 Steve Schwarzman has doubts. So does Larry Ellison.

And so, too, do the growing numbers of Wall Street bankers and investors who are all anxiously awaiting the next move by WeWork and its brash co-founder, Adam Neumann.

Neumann was a no-show this week for a long-planned appearance at a SoftBank Group Corp. three-day retreat in Pasadena, California, according to people familiar with the matter, a further sign that company executives are hunkering down. Once the WeWork initial public offering was postponed late Monday, organizers knew Neumann’s presence would be iffy, the people said. His planned appearance was rescheduled from the first day of the event at the Langham hotel to the last and then cancelled altogether.

In short order Neumann’s office-sharing company has gone from a get-rich story to a you’ve-got-to-be-joking melodrama -- from WeWork to WeWait to, now, WeWorry.

It was a brutal week. First, WeWork’s parent company, We Co., finally conceded that its grandiose plans for going public would have to wait.

Then Schwarzman, one of the most powerful figures on Wall Street, threw shade on the company’s hoped-for valuation, which has already collapsed from upwards of US$60 billion to US$15 billion -- or lower.

“I sort of went, what? How do you get this?” Schwarzman, the head of private equity giant Blackstone Group Inc., said of the early numbers Wednesday at a luncheon in New York. Ellison, chairman of Oracle Corp., went further, according to Barron’s. He told a group of entrepreneurs at his San Francisco home that day that WeWork is “almost worthless.”

And it only gets worse. In London, two deals for major office buildings that are largely leased out to WeWork started to fray. Back in its hometown of New York, the company made a small round of job cuts. And the Wall Street Journal, examining WeWork’s over-the-top culture, reported that Neumann and his friends smoked marijuana on a private jet en route to Israel last summer -- and left a chunk of the drug behind, spurring the plane’s owner to summon it back.

If all that weren’t enough, Neumann’s own bankers were getting antsy: They were looking to revise a US$500 million credit line secured by WeWork stock -- an acknowledgment that those shares appear far less solid than they used to.

And, by Friday, Wendy Silverstein, a big name in New York commercial real estate who joined WeWork last year as head of its property investment arm, had left the company. She’s spending time caring for her elderly parents.

Even the president of the Federal Reserve Bank of Boston was adding to the angst. In a speech Friday in New York, Eric Rosengren warned that the proliferation of co-working spaces might pose new risks to financial stability.

Rarely has so much gone so wrong so fast for a young company in the spotlight. Neumann has begrudgingly agreed to cede some of his powers. The question now: Will that be enough?

“I’ve never seen a company of this size and scale generate such a consensus of negative opinion in my long, long life of following IPOs,” said Len Sherman, a Columbia Business School adjunct professor whose 30-year business career included time as a senior partner at consulting firm Accenture Plc. “There is no box that they haven’t ticked when you think of all the reasons that you might be very concerned -- like blaring red lights. Like, oh my gosh, caution, danger, danger.”

WeWork now hopes to go public next month. But even that may be optimistic. Neumann, also We Co.’s chief executive officer, has to persuade investors that his company -- which has raised more than $12 billion since its founding and never turned a nickel of profit -- is worth billions on the stock market.

Time is short. WeWork must complete its IPO before the end of the year to keep access to a crucial US$6 billion loan.

The company’s US$669 million of bonds due in 2025 have dropped 5 cents this week to 97.75 cents on the dollar as of Thursday, according to the Trace bond-price reporting system.

He was asked what advice he’d give to founders looking to become CEOs of companies that have to answer to shareholders. His answer: