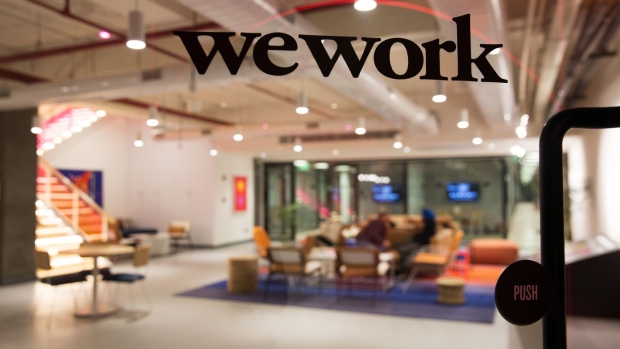 Signage is displayed at the WeWork Cos. 32nd Milestone co-working space in Gurugram, India, on Monday, Feb. 18, 2019. , Bloomberg

WeWork agreed to sell itself to a blank-check company in a deal to take the troubled office-sharing startup public almost two years after a high-profile failed listing.

The agreement will merge WeWork with BowX Acquisition Corp., valuing it at US$9 billion including debt. It will also raise US$1.3 billion for WeWork, including US$800 million from a private placement with investors including Insight Partners, funds managed by Starwood Capital Group, and Fidelity Management.

New York-based WeWork, co-founded by Adam Neumann and heavily backed by SoftBank Group Corp., was valued at as much as US$47 billion two years ago. But plans for an initial public offering imploded in 2019 after investors raised concerns over the company’s business model and Neumann’s management style. WeWork’s valuation plunged to about US$8 billion after SoftBank extended a financing lifeline to the startup. The flamboyant Neumann, known as much for his erratic behavior as for his innovative vision, was subsequently pushed aside.

The coronavirus pandemic took a further toll on the company’s prospects. WeWork’s business model consists of packing high volumes of workers into shared offices, an unappealing option for many people during a health crisis. WeWork has closed many locations, cut thousands of jobs and renegotiated leases in order to survive.

The agreement with BowX takes advantage of a wave of deals with special purpose acquisition companies, or SPACs, to achieve what Neumann couldn’t. Marcelo Claure, WeWork’s executive chairman and the chief operating officer at SoftBank, said in an interview early this year that multiple SPACs had approached WeWork after long being shunned by investors.

Josef Schuster, founder and chief executive officer of IPOX Schuster, which created the IPOX SPAC index, said it’s rare for a company to pull off a successful IPO after an initial fail.

Coming to the market with a SPAC “is really as good as it can get for WeWork, to kind of keep this aspirational life to become a large publicly traded company down the road,” Schuster said. The negative press and events associated with WeWork’s last attempt would have made it “really difficult to raise billions of dollars in the public market, just as a straight and traditional IPO,” he said. “So the SPAC structure here, I think really works for them.” Schuster said he found the valuation “quite rich” since WeWork is still loss-making, but “if they do it well, it could be a winning stock.”

The deal is expected to close in the third quarter of 2021 and has been approved by both boards, according to a statement Friday. The deal was first reported by the Wall Street Journal.

WeWork, now led by CEO Sandeep Mathrani, said in November that its overall membership and revenue shrank in the third quarter compared with the quarter before. The company left 66 locations and re-negotiated lower rent, deferrals or other lease changes at more than 150 others, leaving it with 542,000 members across its 859 locations, Bloomberg reported at the time.

The company disclosed to prospective investors it had lost about US$3.2 billion last year, the Financial Times reported earlier this week. The documents also show that occupancy rates fell to 47 per cent at the end of 2020, down from 72 per cent at the start of the year, before the pandemic hit, according to the newspaper.

In the interview in January, Claure argued the pandemic was helping WeWork. He said the work-from-home situation benefits the company and would continue to do so as people return to the workplace. “This is where WeWork suddenly becomes an incredible value proposition,” he said. “New habits have been developed during this pandemic.”

Mathrani will continue to lead the company after the deal. Vivek Ranadive of BowX and Insight Partners’s Deven Parekh will join the board.

BowX Acquisition Corp. is managed by Ranadive and Murray Rode, both former executives at TIBCO Software and co-founders of venture firm Bow Capital.