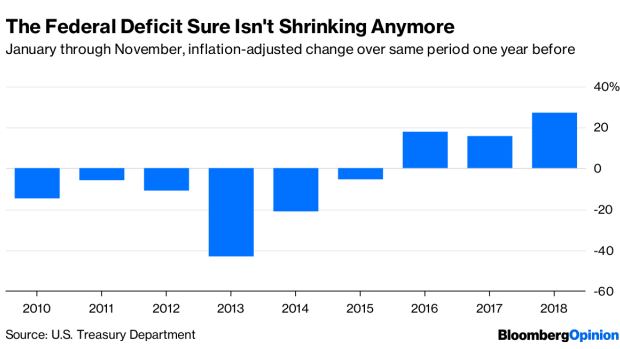 (Bloomberg Opinion) -- Once a month, the Treasury Department reveals how much money the U.S. government took in and spent the month before. The November numbers came out Thursday, and they showed a lot less coming in ($206 billion) than going out ($411 billion). The resulting $205 billion deficit was the biggest ever for a November, and the $305 billion deficit so far in the fiscal year that started in October is 51 percent higher than the deficit in the first two months of the 2018 fiscal year. This is partly because of calendar vagaries that pushed some payments that usually go out in December into November, and pushed some that usually go out in September into October. One should not make all too much of month-to-month budget shifts. The data is too noisy.

Adding lots of monthly budget tallies together, though, allows us to do something interesting and useful: compare receipts and spending by calendar year instead of just by fiscal year. That’s especially interesting and useful this year because a big package of tax cuts took effect at the beginning of January. I’ll do a more extensive look at the numbers next month when we have a full year of data, but I was curious how things were proceeding.

The growth of the deficit has definitely accelerated:

Still, the deficit was growing even before the passage of the Tax Cuts and Jobs Act. So is it the tax cuts that are boosting the deficit, or increased spending? Well, both.

In nominal terms, revenue so far this year is almost identical to that of January through November 2017. There is a small but strangely influential school of economic punditry that insists that such a result means the tax cuts “have not cost the U.S. Treasury money.” One really ought to at least adjust for inflation, though, which I have done in the above charts using the consumer price index. That shows a 2.4 percent revenue decline.

It’s also important to note that the natural tendency in a growing economy, absent any tax changes, is for revenue to rise. Real revenue dropped in 2016, but that was because of the mini-recession that had started the year before. Revenue has risen during every other year of the current recovery. This year the economy is growing at what may turn out to be the fastest pace since the 2000s, around 3 percent, yet revenue is down. Some of that economic growth is surely due to the tax cuts and to this year’s spending increases, but it’s clear that the Tax Cuts and Jobs Act has so far displayed none of the magical revenue-increasing properties that some of its supporters claimed for it last year. If we take last year’s revenue growth of 1.1 percent as the — very conservative — baseline, it would seem instead to have so far resulted in a revenue decline of 3.5 percent, or $109 billion.

Federal spending, meanwhile, is up an inflation-adjusted 2.9 percent so far this year. That’s bigger than the revenue decrease but smaller than last year’s 3.5 percent increase. Overall, my read of the two charts above is that the overall shift since 2015 from shrinking deficits to rising ones has been mainly about rising spending, but the increase in the deficit this year has been mainly about the tax cuts.

These numbers don’t tell us whether the Tax Cuts and Jobs Act was a good idea or not. They do show a deficit that’s getting bigger deep into an economic expansion, amid solid economic growth — which isn’t normal. My Bloomberg Opinion colleague Conor Sen argues that this experiment in “fiscal stimulus ... at a time of full or nearly full employment” has been great news for American workers. There’s surely something to that, but I do wonder about what’s going to happen when the economy finally turns south.