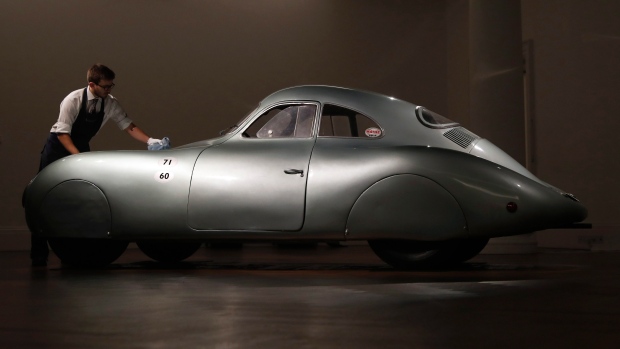 A 1939 Porsche Type 64, the oldest car to wear a Porsche badge and the personal car of German car designer and manufacturer Ferdinand and Ferry Porsche on display during a press preview at Sotheby's auction house in London, Tuesday, May 21, 2019. , AP Photo/Alastair Grant

After the biggest blunder in recent auction history, the Nazi car that Ferdinand Porsche made didn’t sell.

During Saturday night’s highly charged standing-room only auction in downtown Monterey, California, auctioneers at RM Sotheby’s premier sale dimmed the lights and showed a promotional video they had made ahead of the much-anticipated sale of the 1939 Type 64. The controversial silver coupe had been expected to sell for some US$20 million before a massive mistake by the auction house upset the crowded room, leaving some collectors to believe it was an attempt at a joke.

“This is the only surviving example personally driven by Ferdinand Porsche,” the evening’s emcee said, then announced that bidding would open at “US$30 million,” a figure that was written on the front media screen of the auction theater. Half of the crowd laughed; the other half cheered. After rapid bidding up to “US$70 million,” with the crowd on its feet, iPhones raised, and cheering, the auctioneer announced that he said “US$17 million,” rather than "US$70 million." The media screen was quickly changed to reflect the US$17 million sum.

Boos and shocked yelps and shouts ensued. People walked out.

“What a joke,” said Johnny Shaughnessy, a collector from Southern California, who was in the room when it happened. “They just lost so much credibility. My father could have bought that car for US$5 million years ago. It has been passed around for years, and no one wants it.”

“As bidding opened on the Type 64, increments were incorrectly displayed on the screen, causing unfortunate confusion in the room,” the company said in a statement. “This was the result of a totally inadvertent and unintentional mistake.” The company said it was an “unfortunate misunderstanding amplified by excitement in the room.”

Comments from collectors in the crowd right after the episode included “What a scam,” “They just slit their own throat,” and “It worked for Banksy; it didn’t work for RM,” a reference to the 2018 Sotheby’s sale which saw a piece of artwork by Banksy shredded in a surprise stunt just after it sold.

John Bothwell, the director of Pur Sang Bugattis, called it “a massive f__k-up.” Two RM Sotheby’s representatives were not available for comment after the sale; a third walked away without a word when approached for a statement about the car. In an emailed response to a Bloomberg News request for comment, a spokeswoman said that “despite interest from discerning collectors, we were unable to reach common ground between seller and buyer on the night.”

The auction for the Type 64 was terminated in minutes, after no bids above US$17 million appeared in the room.

It’s not enough money. The car is listed as “Still for Sale” on the RM Sotheby’s online auction catalog.

The Type 64 was far from the only rough sale during a weekend where gross totals through Friday were down about 25 per cent, or about US$50 million, from 2018, according to Hagerty. Across the board, while there were 16 more cars offered for the first two days of auctions in 2019, almost 30 fewer cars were sold. The average sale price was US$75,000 less than last year. Insiders at RM Sotheby’s described the current market as “a bloodbath.”

The top seller on Friday, a McLaren F1 expected to sell for as much as US$23 million, took just over US$19 million during the RM Sotheby’s auction that night.

But the Type 64 was the most white-hot of the lot, with noted collectors and Porsche bigwigs discussing its veracity in hushed tones for weeks before the sale. Rather than its UFO looks or its astronomical asking price, it was the name of the car that caused all the hubbub.

Some observers, led by the terminology in RM Sotheby’s own auction catalog, called the silver coupe a true Porsche. After all, it was made by Ferdinand Porsche himself; he even added his name to the front of it about a decade after he made it. And with its round headlights and small rounded hood and roofline, it clearly bears signs of early design philosophies that trickled down to the car that is widely accepted to be the first Porsche, the 1948 356 Gmünd Coupe, and later Porsches like the 911 and Cayman.

Others, including the man who inspected the car for RM Sotheby’s before it went to sale, were careful to note that the Type 64 is not technically a “Porsche.” Its engine and most of its parts were supplied by Volkswagen, with components from Fiat and other niche suppliers of the time. Ferdinand Porsche was building cars for just about everyone in Germany at the time anyway, including Daimler and Auto Union. Porsche AG wasn’t even founded until 1948—10 years after this car was built—so it surely isn’t accurate to call it a true Porsche, the line of thinking goes.

Porsche AG and the Porsche Museum were careful to distance themselves from the sale, declining for weeks to comment to Bloomberg on its nomenclature and relative significance to the Porsche company story. What remains to be seen is what happens to the car next—and how RM Sotheby’s will recover from the debacle.