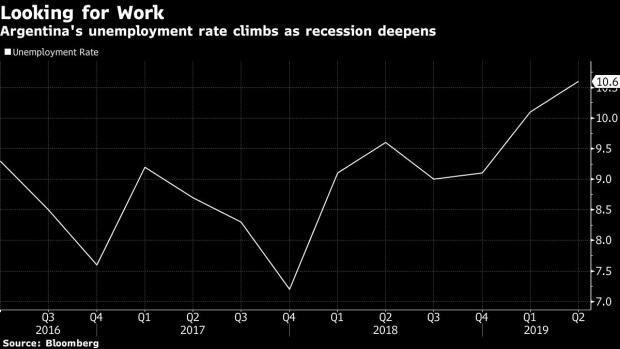 People line up outside of a currency exchange house in Buenos Aires on Oct. 25. Photographer: Anita Pouchard Serra/Bloomberg , Bloomberg

When Alberto Fernandez takes over the Argentine presidency on Dec. 10 he will inherit an economy running short of dollars, with rampant inflation and rising poverty. Don’t expect him to ask Argentines to tone down their expectations though.

Fernandez has pledged to revive Argentina’s economy and ditch austerity, while trying to re-negotiate a loan deal with the International Monetary Fund. They are promises that are likely to push into ever-increasing state intervention and controls that many blame for the crisis in the first place.

“Fernandez and his team believe in government intervention,” said Alejo Costa, chief strategist at BTG Pactual Argentina. “So we expect a return to subsidized loans for small and medium enterprises, lower interest rates, and maintaining certain subsidies and social transfers.”

For the moment, investors and Argentines have been left on tenterhooks. He has yet to detail his economic plan and won’t announce his cabinet until Friday, five weeks after being elected. These seven charts illustrate the dire state of the economy and the policy solutions Fernandez is likely to pursue.

Problem: Argentina’s international reserves have plummeted by $23 billion since Fernandez became favorite to win last month’s election in August. While gross reserves total $44 billion, analysts estimate net reserves are between $10 billion and $12.5 billion. The imposition of currency controls slowed the flight of dollars out of the country, but not stopped it.

Policy Response: The lack of dollars means Fernandez will probably have to renegotiate a $56 billion loan accord with the IMF, which he partly blames for the economic crisis. The Fund has said it will withhold its next disbursement until there’s more clarity around the administration’s economic plan.

“There will have to be some fiscal space to kick-start the economy,” said Hector Torres, Geneva-based senior fellow at the Centre for International Governance Innovation. “I think that could come from the IMF.”

Problem: Argentines have yanked more than $13.6 billion from bank accounts since August, or 42% of the total, according to central bank data.

Policy Response: To keep dollars in the economy, Fernandez is expected to raise taxes on agricultural exports, a policy that was championed by his running mate, Cristina Fernandez de Kirchner, during her term in the presidency.

Problem: As the recession entered its second year, Argentina’s poverty rate climbed to 35.4% in the first half of 2019 from 27.3% a year earlier. The unemployment rate rose to 10.6% in the second quarter.

Policy Response: The president-elect has said he’s seeking a social pact, though the details have been scarce. Like the social programs of Argentina’s past, Fernandez is expected to fix prices for gas and electric, and may go further by granting salary hikes and social security payment increases, according to a person familiar with the plan.

Problem: Argentina’s annual inflation rate has remained above 50% for the past nine months. Consumer prices surged by the most in a year ahead of the elections, rising 5.9% in September from the month before.

Policy Response: Fernandez is likely to re-install utility subsidies to ease the cost of living for the poor. But to do that, he would need to renegotiate contracts with utility providers, removing the automatic link to the exchange rate, Torres said. He’s also expected to expand price freezes on basic foodstuffs implemented by the current President Mauricio Macri.

Problem: Argentina’s chaotic exchange rate market. While currency controls imposed at the start of September have slowed the decline in the country’s peso, they have also led to a resurgence in an alternative exchange rate based on the difference between local shares in pesos and the same foreign-traded shares in dollars. That so-called blue-chip swap rate is currently above 74 pesos per dollar, while the official rate hovers around 60 per dollar.

Policy Response: More of the same. Fernandez will maintain the controls to prevent people from dollarizing their savings or taking money out of the country. He may even tighten the controls further to mirror those in place from 2011 to 2015, which restricted companies from sending wire transfers abroad, placing impediments on imports, Costa said.

Problem: Argentina faces three big dollar-denominated debt payments in the next few months -- $1 billion in December, $900 million in January, and $450 million to the IMF in February. The second quarter looks even more complicated.

Policy Response: Fernandez has pointed toward a debt re-profiling plan that mirrors Uruguay’s restructuring in 2003, which pushed out maturities with a minimal loss in value to creditors. He’ll need to strike a deal with bondholders before the large payments come due in the second quarter of 2020. Creditors are forming negotiation committees, but with bonds trading around 40 cents on the dollar, they’re signaling their expectations are low.

Legacy: One positive trend Fernandez will inherit is a narrowing primary fiscal deficit. Argentina’s budget deficit is expected to be 0.5% of GDP by the end of 2019, narrower than the 2.3% deficit in 2018, according to the Economy Ministry.

Policy Response: While Macri’s administration projected a 1% budget surplus for 2020, Fernandez’s social spending proposals could wipe out that surplus in the blink of an eye.

“Fernandez has hinted in the past that his plans for boosting consumption could involve raising public salaries and benefits, which is something that could have a significant fiscal impact,” said Adriana Dupita, Latin America economist with Bloomberg Economics.

To contact the editors responsible for this story: Carolina Millan at cmillanronch@bloomberg.net, Philip Sanders