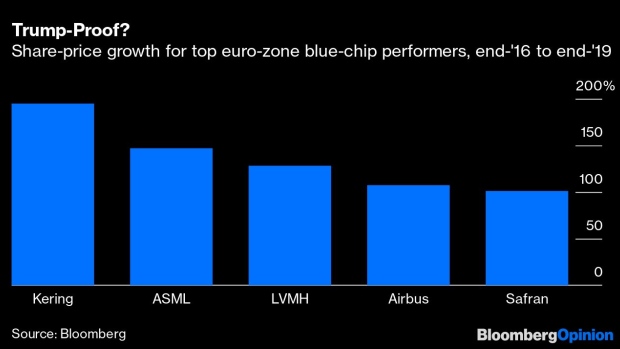 (Bloomberg Opinion) -- The billionaire bromance between Donald Trump and France’s richest man, Bernard Arnault, has surely been one of the more unexpected consequences of the U.S. president’s global trade war. Back in October, Trump lavished praise on the king of luxury — calling him by turns an artist, a great businessman and a gentleman — after LVMH Moet Hennessy Louis Vuitton SE opened a handbag factory in Texas. The symbolism was rich, considering Trump had just days earlier removed leather goods from a list of European products worth $7.5 billion that were hit with higher U.S. import tariffs. Trump wasted no time in spelling out the link: “I can’t tax him, because he moved to the United States.”The mood has cooled since then. Leather handbags and luxury items worth $2.4 billion are now back on the U.S. president’s hit list as part of potential tariffs targeting France, which the White House says is discriminating against U.S. firms such as Apple Inc., Facebook Inc. and Amazon.com Inc. with a new digital-services tax. The U.S. has also threatened more tariffs targeting the European Union related to the long-running dispute over aircraft subsidies between Boeing Co. and Airbus SE. Brussels has dispatched its top trade official this week to try to calm tensions, but there’s every chance the spat could worsen. For a president fighting impeachment and campaigning for re-election, French wines and German cars are tempting political targets.

That has put Trump-whisperers like Arnault in an awkward position. While by no means the chief culprit of the EU’s trade surplus with the U.S. that Trump so hates, luxury products sold by LVMH such as wine and spirits are France’s key export sector after aerospace. The U.S. market brings in about 24% of the group’s revenue, almost as much as France and Europe put together. Shrewd re-jigging of the supply chain, and the luxury industry’s ability to pass on price increases to its well-heeled buyers, have so far helped keep the wolf from the door. LVMH’s pledge to create 1,000 jobs in Texas, even if a “Made In the USA” label leads to upturned noses, has made Trump less likely to want to penalize the company with luxury levies. He’s also less likely to oppose Arnault’s proposed $16 billion acquisition of iconic U.S. jeweler Tiffany & Co.It’s not just LVMH: Airbus, one of Trump’s favorite punching bags and the biggest brand in European aerospace, pulled off a similar feat. Its local presence in Alabama has spared the aircraft it produces in the U.S. from the 10% EU tariffs (and likely deterred Trump from pricier duties). Considering France is being singled out for harsher punishment, the fact that Paris-listed LVMH and Airbus are among the top five best-performing euro-area blue-chip stocks since Trump arrived in the White House will comfort French President Emmanuel Macron.

But how much longer can moving resources into the U.S. keep delivering results? Airbus is scrambling to continue ramping up production in Alabama, where its investment now totals $1 billion, but that hasn’t been enough to silence the threat of higher tariffs. For the luxury-goods sector, not everything “Made in France” can be “Made in the USA.” LVMH is clever enough to sell locally-made U.S. sparkling wine in funky single-serve bottles, but it will never be the same as champagne. European corporate takeovers of U.S. targets, while rising, are vulnerable to Trump’s unpredictability.Europe’s top multinationals may have also been helped by the fact that Trump’s focus so far has been primarily on China. Being a secondary target hasn’t been too bad for the EU: Tit-for-tat tariffs between China and the U.S. actually saw France get a total export boost to both countries worth an estimated 0.3% of GDP, according to Nomura research. (For Germany it was 0.1%.)

It’s clear that exporting high-value items that are difficult to substitute, such as aircraft or luxury goods, is a natural defense against trade wars; Airbus was also helped by Boeing’s troubles. But China may now be receding into Trump’s rear-view mirror following the signing of a phase-one trade deal. If Europe takes its place as Trump’s chief concern, things will be different. While European investment into the U.S. increased by $226.1 billion in 2018, to $3.0 trillion, the U.S. trade deficit with the EU also hit a record that year. Tariffs on German cars — which would be far harder to pass on to consumers than for a bottle of Dom Perignon, or an A320 airplane — remain an ugly prospect, even after an increase in their local U.S. production over the past decade.Europe’s CEOs will be praying the EU can convince the White House that an escalation in tariffs would hurt American jobs, saddle the consumer with higher prices and deter hiring and investment. If that’s not enough, then maybe the next delegation the EU sends should include Arnault and the gift of a few handbags — Made in USA, of course.

To contact the author of this story: Lionel Laurent at llaurent2@bloomberg.net