Prognosticators said volatility would be back this year. They were right. And they were correct to predict Canadian stocks would outperform the U.S.

What they couldn’t foresee was a viral outbreak that has roiled global markets. While it’s too early to assess the full impact of the coronavirus, now designated a global health emergency, it will have economic repercussions in Canada.

China is the second-largest market for Canadian products, according to Bloomberg data. It purchased about $27 billion in goods from Canada in 2018, according to Statistics Canada. It exported $22 billion worth of goods to China in the first 11 months of 2019, representing four per cent of total shipments abroad. China is also Canada’s largest source of tourist arrivals from the Asia-Pacific region with a record 737,000 Chinese tourists in 2018, according to state agency Destination Canada.

A third case of coronavirus was confirmed in Ontario on Friday, bringing the total number to four in Canada. A woman in her 20s arrived in Wuhan from Toronto on Jan. 23 and went to London, Ontario, developing symptoms a day later. She was first tested negative, but a second test confirmed the virus.

Uncertainty about the severity and duration of the outbreak has left economists and analysts making best-guess estimates. Many are reaching back to the SARS outbreak of 2003 for pointers on how things could play out, but China’s economy is now 10 times larger compared with 17 years ago.

Canada’s economy will see the spillover effects of this pandemic “but the impact looks likely to be limited relative to the 2003 SARS outbreak,” Nathan Janzen, a Royal Bank of Canada senior economist, said in a report. China-Canada bilateral travel will decline, he said, though “risks to total Canadian travel inflows will still look smaller than SARS, at least for now.”

The loonie has weakened against the greenback since the new virus began making headlines as the price of oil slumped, bonds rallied and Canada’s stock market dropped (albeit at a smaller scale versus the U.S. thanks to gold stocks). And as earnings season picks up pace in earnest north of the border, Canadian firms are discussing the impact the virus will have on their bottom line. 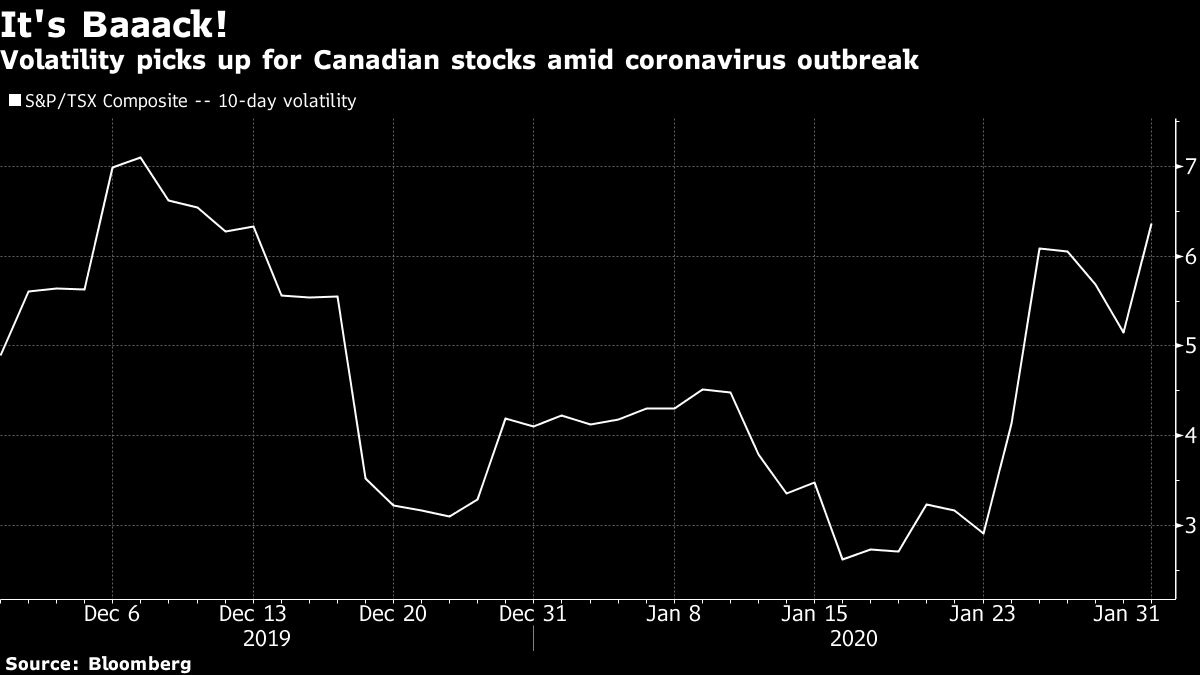 • Teck Resources Ltd. Chief Executive Officer Don Lindsay said that if the coronavirus follows the pattern of SARS, there will be a two- to six-month period in which it will affect the perception of commodities demand. He added that once things get back to normal, it will present a buying opportunity.

• Resolute Forest Products Inc.’s CEO Yves Laflamme said in a phone interview that virus outbreaks are “never good for the economy,” and demand in China, a large consumer of lumber and pulp, may ebb should the impact last for an extended period.

• Sun Life Financial Inc. has asked employees who travelled to mainland China recently to work from home for two weeks before returning to the office, with similar to steps taken by Bank of Montreal and Manulife Financial Corp.

• Air Canada, the nation’s largest airline, suspended all direct flights to Beijing and Shanghai until Feb. 29. Its shares have slumped about 15% since a peak earlier this month.

• Magna International Inc., which has 55 manufacturing and assembly units in China and has a 10th of its workforce there, has banned travel to the country, according to media reports. Magna could also take a hit as carmakers like General Motors Co. and Ford Motor Co. halted some production.

• Canada Goose Inc. is slated to report third-quarter results on Feb. 7. Investors will want to know how the viral outbreak has impacted sales in China and Hong Kong and whether this will be reflected in any year-end forecasts. The luxury winter apparel retailer has two stores in Hong Kong, one in Beijing, Shanghai and Shenyang each.

• At least eight Canadian-listed companies generate 100 per cent of their revenue from China, according to data compiled by Bloomberg. First Quantum Minerals Ltd. received more than 35 per cent of its 2018 sales from China, and Mississauga, Ontario-based Imax Corp., which is listed in the U.S., gets a third.

Canada’s economy unexpectedly expanded in November as cold weather drove a sharp increase in power usage, though the pickup won’t be enough to salvage what is likely to be a weak end to the year. Gross domestic output rose 0.1 per cent in November, beating economists’ estimates for a flat reading, Statistics Canada reported Friday. That follows a 0.1 per cent contraction in the prior month.

Employment data from January is due Feb. 7

Prime Minister Justin Trudeau discussed the new Nafta in a call with Donald Trump. Trudeau “raised the arbitrary detention of Michael Kovrig and Michael Spavor in China, and the two leaders agreed on the need for their immediate release,” according to a readout from Trudeau’s office issued Friday. They also discussed the coronavirus outbreak and “global health emergency and measures being taken by both countries to protect the health and safety of their citizens.”