The last show of the year has historically been my fearless forecast and a recap of the previous year. The Street forecast significantly underestimated earnings but was correct suggesting that the multiple would remain near historic highs. The current trailing multiple assuming that 2021 will earn about $210 (we get these numbers in January-February 2022) from the estimate of $172.50 at the beginning of 2021 seen in the table below. To be far, the forecasts likely did not include the massive COVID stimulus Bill that the Biden administration passed in Q1 that added about $2 trillion plus in spending last year and subsequent adjustments were made. We highlighted the extreme value but suggests support from the Fed could still boost markets. It certainly did, but now that support is waning at the same time we lose massive stimulus efforts. Looking ahead, bottom up analyst consensus is for 2022 is $226.79 and so we can likely round up to $230 given that the bottom up consensus is usually low. The current market at about 4600 makes the math easy at a 20x multiple compared to the 22x multiple we see today. It’s very possible, we see the earnings growth miss a bit and the multiple contracts as bit under a less stimulative economy leaving the yearend target around the same 4600 we have today. According to a Bloomberg survey of strategists last week, consensus is about 5100 with a stable P/E and eight per cent EPS growth. That is in line with the bottom up forecast. My challenge is that with less central bank support and rising rates, the multiple should contract. How much is likely the debate, not if. So I’m taking the under, but that should not surprise given my conservative nature.

Joe Manchin has temporarily killed the Biden Build Back Better (BBB) plan, though something will likely get done in an election year, it will likely be significantly lower and will likely need more pay-for measures. We could easily see the market dip below 4000 in the first half, rally above 5000 in anticipation of Washington gridlock at the mid-terms but a lessor version of BBB at the end of Q1 and slide back to about the same levels we are at now by yearend. 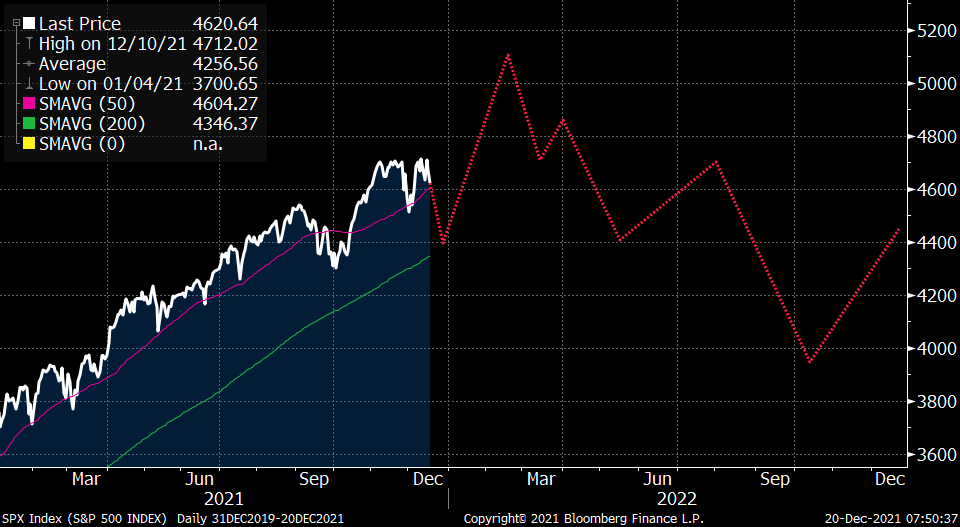 Crude oil averages about $75 with spikes above $80. We don’t see higher energy prices given the economic drag potential.

Inflation remains elevated three to four per cent range from a decade of one to two per cent, but comes well off recent highs. The US 10-year bond hits two per cent plus by mid-year, but likely finishes the year closer to 1.75 per cent. The FOMC raises rates twice and the Bank of Canada raises rates three times to a one per cent target.

Happy Holidays whatever you celebrate this time of year. Stay warm and stay healthy. Our Fall 2021 virtual roadshow is now over. For those of you who missed any, watch all our event replays on our official YouTube channel.