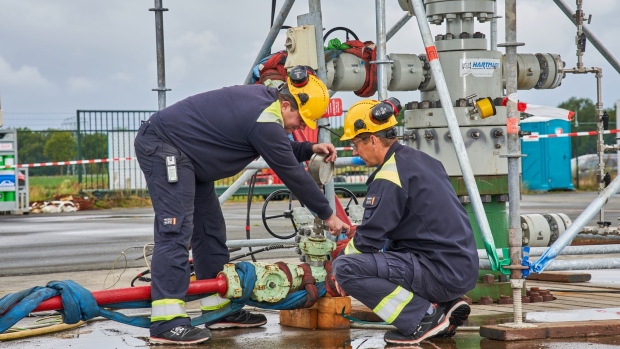 (Bloomberg) -- The Netherlands is throwing a hydrogen life preserver to pipelines that are on the brink of becoming stranded assets.

The nation will end most natural-gas production this year, forcing NV Nederlandse Gasunie to find alternative uses for its 15,000 kilometers of pipes. The state-owned company is studying which segments of its wide network to adapt to transport, produce and store hydrogen over the next decade as the European Union seeks to green its economy.

Home to what was once Europe’s biggest gas field, the Netherlands decided to shut production at Groningen after decades of exploration and pumping triggered earthquakes. Demand will taper off, as well, since the government pledged to cut greenhouse gas emissions by almost half this decade. That leaves Gasunie with as much as 9,321 miles of pipe to either fill with an alternative, idle or dismantle.

“The Netherlands will need hydrogen,” Chief Executive Officer Han Fennema said in an interview. “It will have to move away from natural gas, there is no other way.”

While 80% of the nation’s energy needs are met by fossil fuels, the domestic industry is no more than an economic blip. Government revenue from natural gas dropped to 140 million euros ($160 million) in 2020, compared with 10.7 billion euros a decade before, according to national statistics.

The country also is losing much of Royal Dutch Shell Plc, which is relocating to London after a court ordered it to speed up emissions cuts and the largest pension fund said it was selling holdings in fossil fuel producers.

Plus, pollution is becoming more expensive, with Europe’s benchmark carbon contract setting records. Further increases are expected during winter, just as the continent grapples with an energy crisis pushing gas prices ever higher.

All that makes alternative sources such as hydrogen more attractive and, eventually, more competitive. By 2050, the green hydrogen produced with renewable energy will be cheaper than gas in at least 16 countries, including three in Europe, according to BloombergNEF.

“It is an opportunity for the country to get back to the position it has always had in the natural gas markets,” said Catrinus Jepma, professor emeritus of energy and sustainability at the University of Groningen. “We were the first mover in gas transportation in the past.”

Clean hydrogen could meet a quarter of the world’s energy needs by 2050, with annual sales reaching 630 billion euros ($714 billion), the European Commission said. Europe wants to build 40 gigawatts of green hydrogen capacity by 2030 — about double that of China’s Three Gorges Dam, the world’s largest energy plant.

Hydrogen — no-emission green or low-emission blue — is the continent’s principal remedy for sectors such as heavy industry and transportation that have few alternatives to fossil fuels and can’t rely solely on electrification. The Netherlands sees itself as the carrier.

That’s a long-term view, since green hydrogen isn’t expected to be cost-competitive before 2030. Currently, production is about four times more expensive than natural gas in most countries, according to BNEF. So, remodeled sections of pipeline could lay idle for years waiting for the economics to level out.

“We want to break the chicken-and-egg problem,” said Helmie Botter, manager for business development at Gasunie, which had revenue of 1.4 billion euros last year. “We want to kick-start the market with large-scale projects.”

The master plan envisions connecting offshore hydrogen production sites in the North Sea with updated port facilities, piping the fuel to industrial centers or exporting it. The company is earmarking 1.5 billion euros to convert 1,200 kilometers of pipe to receive pure hydrogen by 2027.

The government is paying half to help cover potential risks and has indicated it could offer more support if needed. As much as 80% of the system eventually could be renovated, Fennema said.

“Many European countries have a vision for vast hydrogen networks, but the Netherlands’ plans appear more advanced,” said Adithya Bhashyam, a BNEF analyst. “Investment decisions are not typically taken before an incentive structure is set up, the regulation is defined and the market exists.”

The U.K. may repurpose about 25% of its gas pipelines to create a 2,000-kilometer “backbone” for hydrogen. In Germany, two transmission operators propose using existing pipeline to help create a hydrogen hub in the east.

Starting a hydrogen industry from scratch isn’t a trivial task, requiring successive governments to maintain a consistent energy policy and different industries to make required capital improvements. Studies also show that hydrogen leaking from pipes can extend the life of methane in the atmosphere, increasing the global warming impact of the greenhouse gas and negating some of hydrogen’s benefits.

And given Europe’s target for carbon neutrality by 2050, intra-continental competition will intensify. Yet even now, Gasunie sees benefits from its fledgling transformation into a hydrogen middleman.

“In the hydrogen world, everything is going faster than we thought it would,” Fennema said. “We already have concrete questions from customers to develop an ammonia terminal and to increase infrastructure. That wasn’t expected.”