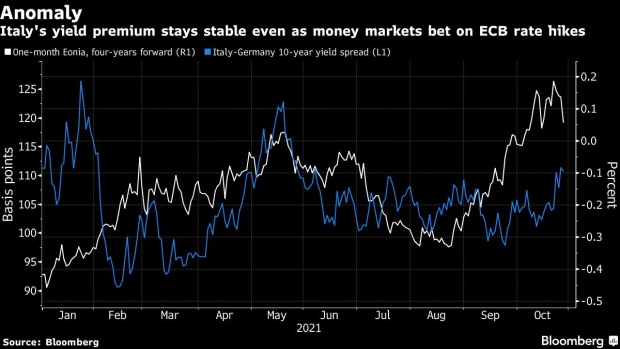 (Bloomberg) -- Investors in some of the euro area’s riskiest bond markets appear impervious to wagers calling for higher rates, betting the European Central Bank will push back against the positioning.

Over the past five months, the market has pulled forward the expected timing of the ECB’s first 10-basis-point increase by a full year, to the end of 2022. Yet the extra yield traders demand to own 10-year Italian securities over equivalent German paper has hardly budged since then.

Given Italy’s outsized debt load, the spread is among the most sensitive to tighter financial conditions. And it suggests investors expect President Christine Lagarde will reaffirm the bank’s commitment to keeping policy exceptionally loose when it sets policy on Thursday, potentially by pledging to buy government bonds for longer.

“The stability of long-end bond spreads is seemingly pricing an endless QE program,” said Jose Maria Fernandez, a rate strategist at Banco Santander SA. “We expect very dovish language on Thursday, with Lagarde probably even pre-committing already to keeping asset purchases going for at least most of 2022.”

That could push the timing of a possible hike “well into 2023,” Fernandez said.

While the bank’s flagship 1.85-trillion-euro ($2.14 billion) pandemic bond-buying program, or PEPP, is set to end in March, a separate asset purchase program is due to continue at a monthly pace of 20 billion euros. The ECB is expected to offer clarity on how long that will last in December.

Earlier this month, Bank of France governor Francois Villeroy de Galhau, said the ECB should keep the flexibility of its crisis-fighting quantitative easing program by creating a “contingent option” that could be activated if needed.

That would give the bank more freedom than before the crisis to buy debt securities of different countries at times of market stress. The purchases have been integral in driving borrowing costs for even the weakest member states in the euro area to record lows.

Since the depths of the pandemic last year, the spread between Italian and German benchmark bonds has halved to 111 basis points on Thursday. That compares with an average of around 200 basis points over the past decade.

Imogen Bachra at NatWest Markets is not convinced policy makers will follow through with Villeroy’s plan. Instead, she expects Lagarde to talk down the tightening bets to bring them back in line with the bank’s forward guidance.

“They are inconsistent with current guidance and I am sure Lagarde will remind us of that,” she said.