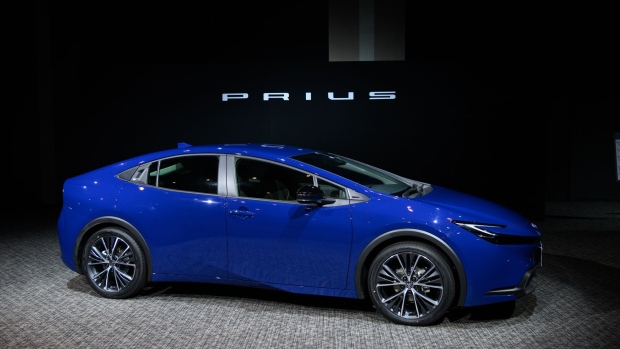 (Bloomberg) -- The new Toyota Prius doesn’t cut it. Not by a long shot.

The redesigned hybrid that debuted on Nov. 16 at the Los Angeles Auto Show won critical applause for its improved body. It looks less like a medical appliance from the 1980s and more like a pretty teardrop.

But the econo-appliance routinely owned by the nation’s absolute worst drivers (proven time and again by unscientific studies conducted by moi) is not the electric vehicle we deserve. We deserve something that looks so good, we glance back after parking near one. Something that makes us smile like a 9-year-old on helium gas and summer break when we press the accelerator. We need something that we drive because we love it, not because the neighbors say it’s “the right thing to do.”

As somebody who drives cars for a living, here’s what I think EVs should be in 2023 and thereafter.

To start with, sticker shock.

The average price of an electric vehicle in the US is $66,000, a 13% increase over 2021, according to Kelley Blue Book. The average price for an internal combustion engine (ICE) vehicle is $48,000. You can see evidence of this disparity simply by driving around Anytown, USA: Count how many EVs you see in upscale neighborhoods versus working-class and poor neighborhoods. The discrepancy is sinful.

My colleague Kyle Stock reports that some wealthier EV owners hoard them. Which, uh, kind of defeats the purpose. Nearly 30% of new EV buyers in this year’s second quarter either traded a used EV for a new one or just bought another—and 9% of recent EV buyers already owned a hybrid, according to Edmunds. Worse, a recent Bloomberg survey of EV drivers showed 14% of respondents saying they owned more than one battery-powered vehicle. Some 6% said they have at least three.

This is a problem because EVs leave an enormous carbon footprint during production, far larger than those of gasoline-powered vehicles. The only way for an EV to offset that carbon, Stock writes, is in covering miles. But households that own more than one EV drive each successive vehicle less. EVs won’t save the world if only rich people buy them—especially if they’re just sitting in garages.

If you’re going to charge a price premium for a product, it had better be worth it. I’m tired of startups like Lucid, Rivian, Tesla, Fisker and Faraday Future expecting to get a pass on inferior quality just because they claim to be saving the world.

EV makers owe consumers cars that are built well, with quality and performance befitting their price tags. Since their inception, electric vehicles from startup companies have polluted the automotive gene pool with shoddy manufacturing, poor craftsmanship, unreliable technology, unsafe driving systems and cheap components. (One horror story had Rivian managers fishing damaged electrical cables out of the trash and telling staff to use them in new products, Bloomberg reported in January.)

According to JD Power’s most recent initial-quality study, overall quality in new vehicles dropped 11% this year; the biggest drops came from EV makers including Polestar and Tesla.

I’ve seen the failure to produce quality products firsthand, from the uneven body panels notorious at Tesla to the easily removed components I saw in the Lucid Air and the finicky technology I experienced in the Rivian truck. Those surfaced in press loaner vehicles, which are meant to represent the best of what the company has to offer. I can’t imagine what a year of driving them as daily commuter cars might do, but it can’t be pretty. Consumers and even employees have complained—and filed suit.

JD Power’s director of global automotive, David Amodeo, said in a statement about the quality report that the pandemic put a damper on the industry. But he noted that the intense level of expertise required to make an EV is what has dragged down quality for everyone.

“Automakers continue to launch vehicles that are more and more technologically complex in an era in which there have been many shortages of critical components to support them,” Amodeo said.

EV startups are particularly susceptible to materials scarcity because they lack big parent companies that can funnel parts to them. In June, Elon Musk told Bloomberg that supply chain constraints pose the biggest impediment to Tesla’s growth. Established brands such as Porsche, Audi, Mercedes and BMW have the advantage here because their parent companies help buffer shortages and financial constraints; they also have decades of experience making the most complex thing most people buy: a car.

EV startups need to shape up quickly as the big legacy automakers start to unroll new, fully electric fleets in 2023 and thereafter. They need to start reliably providing high-grade interior materials; seamless body panels; functional, intuitive infotainment; reliable drive and safety systems; and components that don’t look as if they came out of some backroom spare parts bin, or they’re going to get crunched by the big guys.

I’m not going to ask for more range or extended battery life for EVs in 2023. I know that’s coming, and study after study shows that most Americans drive fewer than 40 miles a day, anyway. Charge time is what makes me anxious.

But this isn’t just about charging faster. In 2023, EVs will need to charge better. They need to improve the charging experience.

I’ve spent more than my share of time hanging around dodgy parking lots and shopping centers, and anyone who owns an EV will empathize. It’s never as simple as just driving to a charging station and plugging in. That perfect scenario assumes an empty charger that’s conveniently close to your normal driving route and actually works. These variables are far from assured, even in California—the biggest market for EVs in the US—let alone Boston, Dallas or Miami.

Meanwhile, the time required to charge a vehicle depends on such things as the state of the batteries in the car; the specific charger; how many others are plugged in beside you; and even the weather on a given day.

To simplify it all, car companies generally report charging times by mapping out how much electricity a car can receive at one time and how quickly. They put it on X and Y axes. As the battery fills, it accepts less electricity and charges slower, which is why we get charging times in a range rather than an absolute number. For example, the Porsche Taycan reports charging from 5% to 80% in 23 minutes; the Mercedes-Benz EQS reports 10% to 80% in 31 minutes.

But these numbers reflect optimal conditions on DC fast chargers, not on slower AC chargers and home plug-in outlets, which can see charging times stall up to 12 hours. If you’ve got a garage, great. If not, I know you definitely do not have the bandwidth to spend that amount of free time chained to a plug. Nor do I. This has to improve.

Finally, my personal favorite: EVs must become sexy. I would say “sexier” but that would imply they already have some allure. Apart from a few hypercars such as the Rimac Nevera and Pininfarina Battista—and for those few who fetishize the Prius (see: Rule 34 of the internet)—they don’t.

Sex and affordability can coexist. Ferrari’s Dino was a bargain basement offer when it debuted in the 1950s—Ferrari wouldn’t even put its name on it—but I defy anyone to say that the Italian stallion isn’t a stunner. See also: The Graduate’s Alfa Duetto Spider and that smoking-hot Fiat Abarth commercial.

Here’s the problem: Modern EVs sprang from the grass roots of those who procured used French-fry oil or tinkered with solar panels before sustainability was much of a dream. It’s a group that, while admirably forward thinking, includes your oddball neighbor and, well, Elon Musk. These are the opposite of aesthetes; just check out Musk’s nightstand.

The efficiency-at-all-cost mentality meant that early EVs were designed for humble practicality, resulting in such things as worn-out Volvo composites powered by biofuel and the Tesla Roadster. Even in final form, the Chevy Bolt, Nissan Leaf, Lucid Air and Tesla Model 3 feel like neutered versions of four-wheel transport—or worse, incel versions of a car.

The best we have—Porsche Taycan, Mercedes-Benz EQS, Audi e-Tron—do possess a certain level of attraction. But they’re sedans, not sexpots. They do not have the makings of a Pirelli calendar photo shoot, so to speak, if the shoot were to include actual cars.

What we need are EVs that prioritize beauty over reduced drag and less battery drain. If we could afford to sacrifice some efficiency for shapelier arches or angular edges, some dramatic flair across the body lines, it would go a long way toward getting our blood going. Why not electrify  that new Porsche 911 Dakar? That could be sexy in a Moroccan desert kind of way.

I am not without hope. A two-door EV, rather than four-door EV, instantly improves prospects. Genesis hinted at a sexy electric convertible on Nov. 15 in Malibu, California; Porsche will unleash a two-door EV by 2025; and Polestar will produce one by 2026. Fiat is even bringing back the electric version of the 500 it initially launched with Jennifer Lopez.

Rolls-Royce beats them all, though. It will deliver its Spectre electric coupe by the end of 2023. A British gent in the finest tailoring, with a massive powertrain underneath that suit? That’s an EV to look forward to. Now if only we could do something about the six-figure price tag.