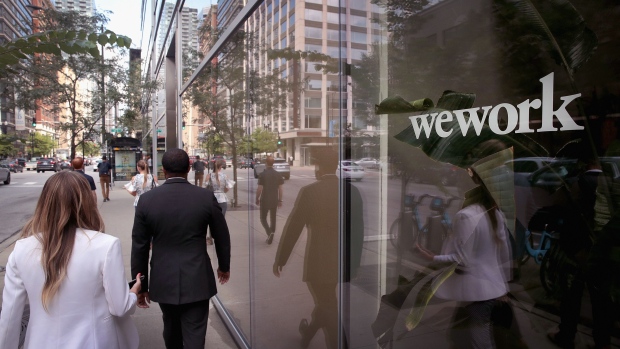 A sign marks the location of a WeWork office facility on August 14, 2019 in Chicago, Illinois. , Scott Olson/Getty Images North America

(Bloomberg Opinion) -- What to make of WeWork, the fashionable, unprofitable, metaphysically inscrutable $47 billion office-rental company that intends to “elevate the world’s consciousness” and potentially go public this year?

As a start, ignore the lack of profits, bewildering organizational chart, ill-advised share structure, outlandish lease obligations, expansive conflicts of interest, and general air of irrational exuberance that attends the company. Instead, focus on what WeWork says about itself in public filings and a deeper problem becomes clear.

All companies try to flatter themselves in such documents. The innovation by the We Co., as the parent is formally called, is to make even the complimentary parts all but incomprehensible. Its prospectus is a compendium of hype, euphemism and alarming non sequiturs. One analyst called it a “masterpiece of obfuscation.” It starts with a bold tautology — “We dedicate this to the energy of We” — and manages to go downhill from there.

Tenants are now “members.” Office rentals are “space-as-a-service.” Employees are “trained community managers who foster human connection through collaboration and holistically support our members both personally and professionally.” There are plans to “reinvent the future of work,” to “create a world where people work to make a life,” and to help members “express their full and authentic selves.”

No one should expect Shakespeare in a Form S-1. But flimflam of this kind should nonetheless be a red flag: It suggests a company that can’t plainly describe what it does, say what it means or articulate what it hopes to achieve.

More worryingly, WeWork extends this chipper ambiguity to less abstract matters. Its unit economics, for instance, are largely obscure: The prospectus fails to make clear how much profit (or loss) individual WeWork sites produce over the long run. Helpfully, the company shows that its Contribution Margin Including Non-Cash GAAP Straight-Line Lease Cost yields a tidy profit. The only problem is that it has made this metric up.

One could argue that there’s no real harm to any of this. So long as their decisions are fully informed, investors should have every right to take risks on unprofitable, mismanaged or linguistically challenged companies — or to take a pass on them. To a large extent, the market is self-policing: WeWork’s estimated valuation has been slashed in half since its prospectus was published and its public offering is now in jeopardy.

Even so, the Securities and Exchange Commission should be on guard when businesses find inspired or innovative ways to distort language to their ends. Under Rule 421 of the Securities Act, companies are required to use plain English in such filings, and with good reason. Doing so helps avoid mistakes and misunderstandings, builds trust between a company and its investors, and leads to sharper thinking, better judgment and clearer communication — which is supposed to be the point. As the former SEC Chairman Arthur Levitt once wrote, sparingly: “The benefits of plain English abound.”

If WeWork helps other companies learn that lesson, it may just elevate the world’s consciousness after all.