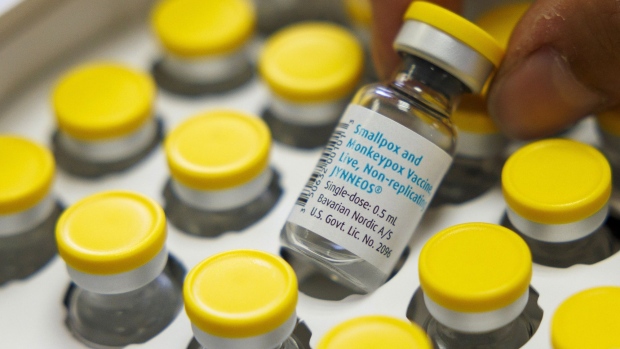 A health worker handles a vial of the Bavarian Nordic A/S Jynneos monkeypox vaccine at the Calit Medical Center in Tel Aviv, Israel on Sunday, July 31, 2022. As health authorities all over the globe search for ways to stop the monkeypox outbreak, investors are snapping up shares of companies that could benefit from the race to quell the disease. , Bloomberg

(Bloomberg) -- More than three months after the World Health Organization said it would combat the stigma and racism around the monkeypox virus with a new name, no decision has been made.

In August, the group began allowing people to submit new name ideas through an online portal. Since then, there have been over 99 proposals — including Rodentpox-70, Mpox, Human mediumpox, Bonopox and MOVID-22 —  but no new news about whether any of them have been chosen or short-listed. A spokesman for the WHO said in an email it expects to receive reports from experts on new names “soon.”

The process is moving too slowly for some. Jeremy Faust, an emergency medicine physician at Brigham and Women’s Hospital, supports changing the monkeypox name and applauded the WHO for identifying it as an issue. He even submitted his own suggestion on Aug. 12, and said he was in touch with WHO experts and was encouraged by positive feedback.

“We know they’re paying attention, the question is when are they going to take action,” Faust said. “The frustration for me is I’m still seeing patients, and the stigma is a barrier for them to get tested, which contributes to the spread of the virus.”

Faust’s proposal, Opoxid-22, follows the Covid-19 naming framework: an abbreviation of the disease name, coronavirus disease, and the year it was discovered, 2019. He believes new and existing diseases should be named as scientifically and plainly as possible to reflect only what is known about them.

“With monkeypox, we know it’s caused by the orthopoxvirus — that’s not going to change whether it came from a monkey or squirrel,” Faust said. “When I tell patients they may have monkeypox, they look at me like I’m crazy, you can feel the stigma with those interactions. It sounds like they have some sort of animal disease.”

Monkeypox has long been seen in a range of mammals, with cases sometimes spreading to people, mainly in central and western Africa. In May, the virus began spreading more widely, particularly among men who have sex with men. As of Sept. 14, more than 66,500 cases have been recorded globally, according to the CDC. While monkeys are susceptible to the virus, previous outbreaks are associated with rodents. Monkeypox symptoms include a rash and flulike symptoms.

The WHO’s International Classification of Diseases unit has consulted on the name with expert and national advisory groups in recent weeks, spokesperson Tarik Jasarevic said. “WHO is expecting their report and recommendations soon, which will also cover the options of additional names,” he said.

“The process for exploring new or additional names for existing diseases has been greatly accelerated,” Jasarevic said. “This normally occurs over the course of one or more annual cycles of review.”

The controversy over monkeypox’s nomenclature is not an anomaly. In 1981, gay-related immune deficiency was renamed to acquired immunodeficiency syndrome, or AIDS, a year after the first case was identified to reduce stigma. The monkeypox name hasn’t changed since the first human case was identified in 1970, before naming guidelines were adopted. When the WHO released a best-practices document for naming new human infectious diseases in 2015, it advised against using species or class of animals or food, specifically calling out “monkey pox” as an example of what to avoid.

“There’s a precedent, so it’s necessary and achievable,” Faust said. “Renaming the virus the right direction. In fact, healthcare is getting better at acknowledging these problems and trying to be more welcoming.”