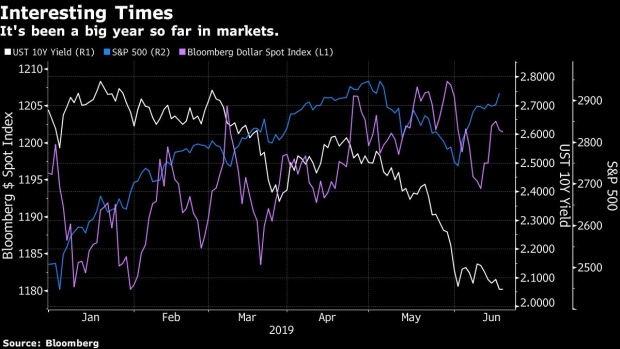 (EDITORS NOTE: Image was created using a variable planed lens.) The Marriner S. Eccles Federal Reserve building stands in Washington, D.C., U.S., on Friday, Nov. 18, 2016. Federal Reserve Chair Janet Yellen told lawmakers on Thursday that she intends to stay in the job until her term expires in January 2018 while extolling the virtues of the Fed's independence from political interference. Photographer: Andrew Harrer/Bloomberg , Bloomberg

(Bloomberg) -- Wednesday’s Federal Reserve rate decision, set to be announced at 2 p.m. New York time, carries more wild cards than most. While market participants don’t expect a rate cut this time around, they do see lower rates this year.

The S&P 500 Index has risen the past two sessions to less than 1% below its record high from April. The 10-year Treasury yield is threatening to fall below 2%. The VIX is just a tad above 15 and Treasuries and rates volatility has surged.

Here’s what a selection of market watchers are saying about the Fed decision:

The market is aggressive in terms of what it expects the Fed to do. The bias would be for disappointment, just because the expectations are so high. The S&P 500 is priced for a good outcome from the Fed, so equities are vulnerable. But that could be quickly reversed -- there have been enough times where the Fed has made statements that the market perceived as not dovish enough, and they came out with statements later to get the market more in line with what they’re thinking.

Read about how markets may be underpricing risks ahead of the Fed and G-20.Read about three weeks of happy apathy coming due for stock bulls.Read about game plans from JPMorgan and Goldman around a Fed cut.

The current uncertainty about the Fed reaction function is highly unusual; short-term rates volatility is at the highest level since the financial crisis because some investors believe the Fed will cut tomorrow, others that they will cut in July, and I also talk to clients who say that the Fed will not cut rates this year.

Read about Slok and Hatzius saying don’t be so sure Fed is cutting rates.

Most striking is that the disagreement about what the Fed will do and how markets will react is mainly a fixed-income discussion. VIX and equity markets don’t seem to worry about this. Rates and equity volatility should converge once we get some clarity from the Fed, either VIX will go up or rates volatility will come down, Slok said.

Short interest in TLT (the iShares 20+ Year Treasury Bond ETF) is now at the highest level in more than four years. This perhaps indicates that investors believe the rates market has gotten ahead of itself and could reverse its momentum sharply in the instance the Fed is indeed more hawkish than expected in their June FOMC statement.

Craig Vardy, head of fixed income for Australia in Sydney:

The mentality of the market at the moment in fixed income is buying dips. Investors are still going to be looking for yield. We’ve got some Treasury flatteners but more toward the longer end.

It’s just not as clear cut as it could be. The market seems to be expecting a lot of dovishness, so the risk is toward disappointment and short-term reversal in yields higher, gold lower, U.S. dollar higher. But I would not expect it to last. This is a market whose longer-term view has already been voted on, by jumping hands and feet in.

Implied volatility in rate-sensitive areas of the market offers attractive relative value. Financials (XLF), Emerging Markets (EEM), and SPX implied volatility screen low in our frameworks. EEM is our preferred upside trade, still down 6% vs. early May with short-dated skew a touch above average. Financials relies on rate expectations (and benchmark yields) rising from current levels if cuts are gradually priced out.

Almost no matter what they do it will be difficult to avoid a U.S. slowdown (unless it were radical like renewed quantitative easing). I would remain underweight U.S. equities even if they cut. Certainly if they do surprise, equities will rally, but I don’t think it’s sustainable.

--With assistance from Christopher Anstey and Ruth Carson.

To contact the editors responsible for this story: Christopher Anstey at canstey@bloomberg.net, Divya Balji, Cormac Mullen