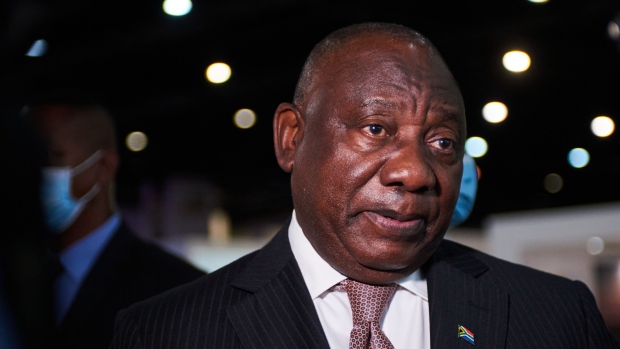 (Bloomberg) -- South African President Cyril Ramaphosa is considering quitting after an advisory panel found the “cash-in-sofa” scandal that’s embroiling his administration may be grounds for his impeachment.

The panel, led by a former chief justice, found the president may have violated sections of the constitution following the theft of $580,000 stashed in a sofa at a game farm owned by Ramaphosa. The African National Congress’s National Executive Committee is due to discuss the findings and Ramaphosa has spent much of the day in consultations over the report.

Investors awaiting answers have been selling South African assets amid fears that his potential departure may set back reforms aimed at bolstering economic growth, stabilizing public finances and tackling graft.

The dollar-rand cross jumped by as much as 4.4% to 17.9596, its biggest increase since March 2020, when South Africa shuttered all but essential services during its first Covid-19 lockdown. The yield on 10-year rand-denominated debt surged 91 basis points to 11.71%, the most in a day since former President Jacob Zuma’s axing of Nhlanhla Nene as finance minister in December 2015 roiled markets.

Here’s what investors and analysts are saying:

“The market is reacting negatively, but if Cyril Ramaphosa’s position is so compromised that he’s looking to resign, it shouldn’t be too bad for South African assets. The market dreads political instability and often prefers to go with the devil they know than the devil they don’t.”

“Ramaphosa’s reform agenda has been underwhelming to say the least. Doubts will remain as to whether another ANC candidate can kick start that process, but we surely know that Cyril Ramaphosa is unlikely to deliver what is needed.”

“This is happening at a time when South Africa’s been in a better place fiscally in recent years, but, I think the market doesn’t fully buy into the durability of this better fiscal story. The main objection people raise is that well, elections are on the horizon in a year and a half and the news of the last 24 hours could translate into increased spending pressures, if the president is replaced or if he stays on, and this weighs on his ratings, on the party’s ratings, it’s just going to make the ANC’s task in 2024 elections that much more difficult and I think the market will take a view that the fiscal risks will increase.”

“Were Ramaphosa to offer to step aside, the ruling party would need to put forward a candidate -- either the deputy president or a care-taker president. We do not believe that Deputy President David Mabuza, who did not receive enough nominations for the upcoming” ANC leadership contest on Dec. 16-20, will be put forward.

In our view, the party’s treasurer-general and acting secretary-general, Paul Mashatile, who currently has the most nominations for the post of deputy president for the December elective conference, will likely be put forward for the presidency.

“From a markets perspective, we believe that an early departure of President Ramaphosa will be perceived negatively, as the progress that he has made on reforms in the power sector and rebuilding of institutions will likely wane. Although Mr. Mashatile has already indicated that his party would focus on the economy, as a priority, we believe that financial markets will take time to warm up to him.”

“The report introduces much more uncertainty than investors were prepared for. Investors will basically want to know what happens next in parliament and in the elective conference: both are immediate challenges, the latter is the more likely I think to present a challenge to Ramaphosa.”

“This finding most certainly throws the cat amongst the pigeons with respect to the December elective conference, and further imperils the prospects of both ANC renewal and meaningful economic, social and pro-democracy reforms. It is a victory for the regressive elements in the ANC.

South African business will remain resilient, even if these developments will breathe oxygen into the crime and corruption networks the president was seeking to target. It will provide oxygen, in turn, to those who wish to see a new political alternative to the ANC rise out of the ashes in advance of 2024 national elections.”

“President Ramaphosa was seen as the president of hope and renewal. His recent trips to the White House, COP27 in Egypt the G-20 and Buckingham Palace saw him solidify relationships with world leaders whilst pushing for funding for the renewable energy transition and extending trade relations. The timing of a possible impeachment and the ushering in of a new ANC president puts all these efforts at a standstill.”

“We seem to have reached the end of the road of the president’s post-2017 contradictions and things will revert to type in some ways. Investors are going to need to get ready for what reopening the taps looks like. Analysts and ratings agencies dropped the ball in the Zuma years on blatant corruption till it was staring them in the face and that cannot happen again. Other policy areas may see less change -- fiscal won’t suddenly dive off a cliff -- and reforms and the need to solve energy and logistics won’t disappear but will get noisier and more complex”

Lumkile Mondi, a senior economics lecturer at Johannesburg’s University of the Witwatersrand

“I don’t think much is going to change. Finance Minister Enoch Godongwana has been very clear about where South Africa needs to go and given the medium-term budget policy statement that he issued, it’s very, very clear where the course is heading to: We are consolidating, we are working very, very hard to mobilize global finance for our transition, we are engaged with institutions to help us overcome our energy insecurity.”